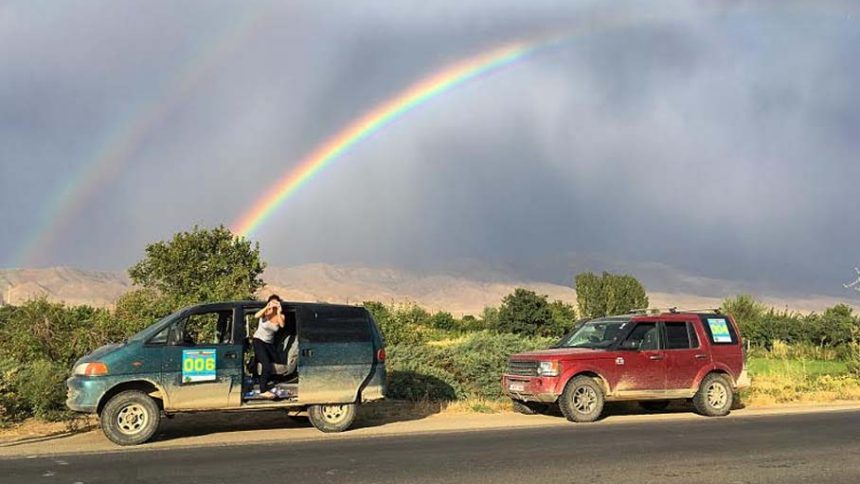 The Caucasian Challenge 2016 teams arrived in Yerevan, the final destination of the adventure road trip in Caucasus. The last two days of the rally took the participants from Nagorno-Karabakh to Armenian capital through the mountainous roads full of mystery and adventure.

The tenth day of the adventure travel in the Caucasus started with an official mission. Nagorno-Karabakh visa policy requires visitors to head to the capital Stepanakert to obtain visa. There is some kind of border control; however, nobody asks visa when you enter the region. The visitors are supposed to go to the capital and obtain their visas to continue their journeys without any legal issues.

The first interesting structure that welcomed the Caucasian Challenge 2016 participants in Stepanakert was the “We Are Our Mountains” monument, known by the locals as the “Grandma and Grandpa (Tatik & Papik).” These humongous red stone faces are highly symbolic for Karabakh. They even appear in Nagorno-Karabakh’s coat of arms. 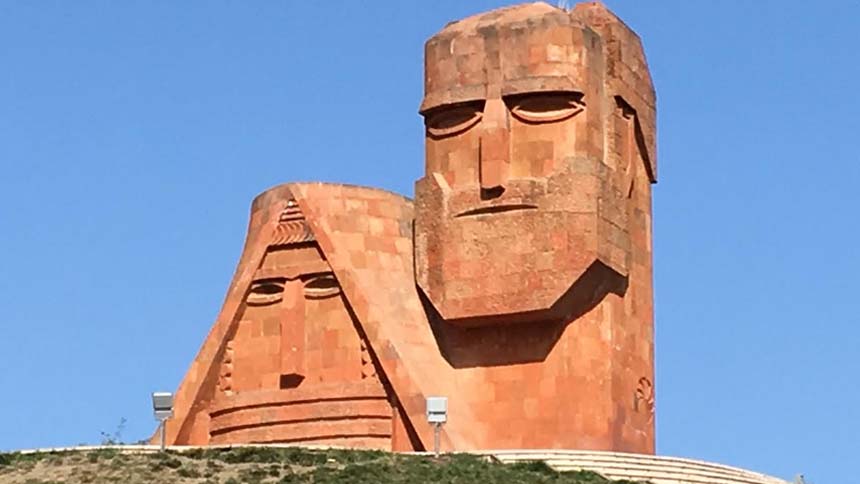 We Are Our Mountains (aka Grandma & Grandpa) Monument in Stepanakert

The monument featured in a video clip shown before the Armenian singer’s performance at Eurovision Song Contest 2009 semi-final round. The part featuring the monument was cut out before the final round upon the request of the Azerbaijani officials who claimed that featuring Karabakh in such a video is wrong as the region is de jure part of Azerbaijan. After this incident the fame of the monument increased immensely. Therefore, you must have a photo in front of it if you are in Stepanakert already.

The capital of the Nagorno-Karabakh Republic, Stepanakert is quite modern. The investments from the Armenian diaspora have helped the local government to give a modern face to the old Soviet city. Spending time in Stepanakert was nice; however, the real adventure was waiting for the Caucasian Challenge 2016 participants.

Adventure road trip in Caucasus continued towards the dangerous territories, the buffer zone between Nagorno-Karabakh Republic and Azerbaijan. Before the border, there is a ghost town called Agdam. The city grew significantly during the late Soviet period and had reached a population of 28,000 people by 1989. During the Nagorno-Karabakh War, Armenian forces captured the city in 1993. The heavy fighting forced the entire population to flee from the town. NKR forces destroyed the whole city. However, the mosque is still intact and it is the only landmark which can be visited in the town. 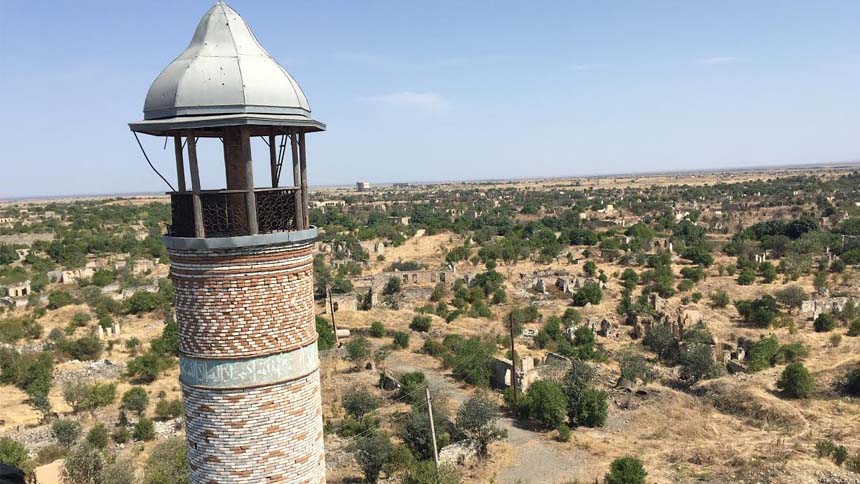 Minaret of the Mosque in Agdam

The tension between Azerbaijan and Armenia has not been soothed yet. This April saw the most casualties since the war ended two decades ago. Visiting Agdam is not recommended. However, adventure road trip in Caucasus took the intrepid racers of the Caucasian Challenge 2016 to the area. The trick is that you shouldn’t tell your real itinerary if you meet the security forces around the city. 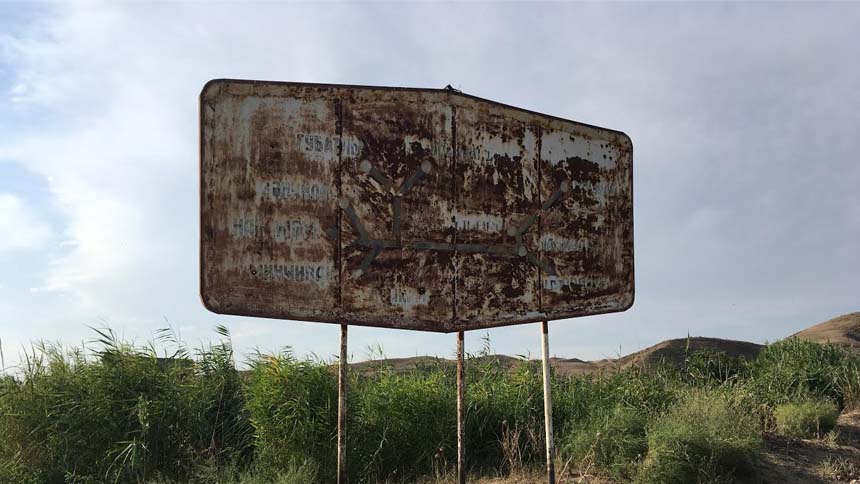 The teams drove to South in order to witness the devastating face of war. The deserted town constitutes a horrifying picture revealing the ugly truth about war. It is hard not to imagine that there used to be life in this town not so long ago although nature has already reclaimed dominance in this place. Rusty road signs, destroyed walls of houses, and ruined frescoes… It is an open air museum, a sheer witness of history. 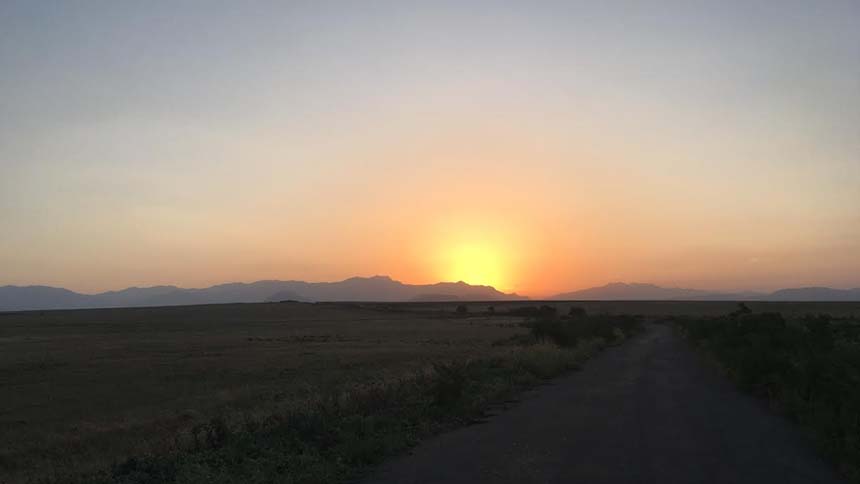 The teams ended up driving alongside the Iranian border while getting away from the ghost town. Team Llanfair even tried their luck at getting across in vain. Nagorno-Karabakh stage of the adventure road trip in Caucasus was over as the teams crossed back to Armenia while watching setting sun. They arrived their rather Soviet hotel in Kapan. After a long and slightly dangerous road trip, it was a perfect time to celebrate the birthday of Floris of Team Care Bears. Birthday cakes are too cliché. The Caucasian Challenge participants replaced birthday cake with a vodka-infused watermelon. Watermelon is the best fruit to consume in Summer anyways.

The Caucasian Challenge 2016 Day 11 marked the last moments of the adventure road trip in Caucasus which spanned an itinerary of 4,000 km between Istanbul and Yerevan. It is definitely one of the best adventure travel rallies in the Caucasus region as it requires the participants to be brave and drive through the places that no one dares to visit.

The last stage of the rally was run between Kapan and Yerevan. The last day of the adventure road trip in Caucasus started with worrying news for Team Care Bears. Their car’s fuel tank was leaking all night long. There was no fuel left to start the Day 11 challenge. However, if you are a Caucasian Challenge participant, you have to find an alternative way instead wining about the current circumstances. While looking for a way to get the car going, they found out that the tank could hold up to 25 liters of gas which would take them to the final destination with regular stops along the way. They would sell their car to the Armenian mechanic that they had met previously anyways. All they had to was keeping the car alive until Yerevan.

The first landmark on the way to Yerevan was Tatev Monastery. The beautiful structure has been standing on a hilltop for over a millennium like a sublime eye which sees everything. The hilltop is surrounded by deep valleys which offer stunning view. The monastery is reachable via the longest non-stop double track cable car in the world called the Wings of Tatev. It runs through 6 km in the air. It is a long journey if your life depends on the strength of an iron cable above you. At some points it goes above 1000 feet above the ground which offers amazing vantage point for photographers. 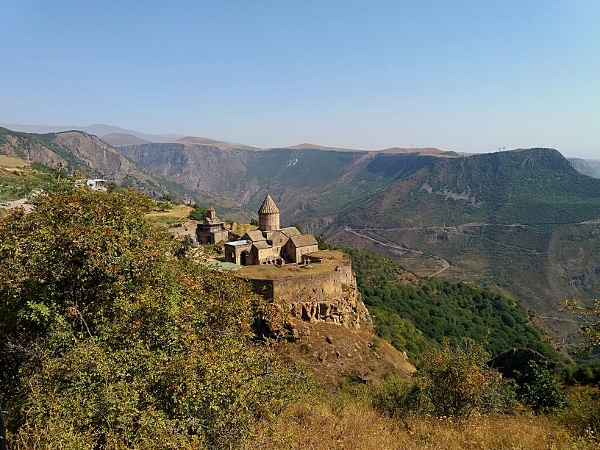 After visiting the Tatev Monastery, the teams drove towards the Mount Ararat. The mountain is one of the most significant symbols of Armenia although it is located on the other side of the border with Turkey. It contains the highest peak in Turkey with an elevation of 5,137 m (16,854 ft). It poses like a colossal statue posing for people who want to have fantastic profile pictures for their social media accounts. 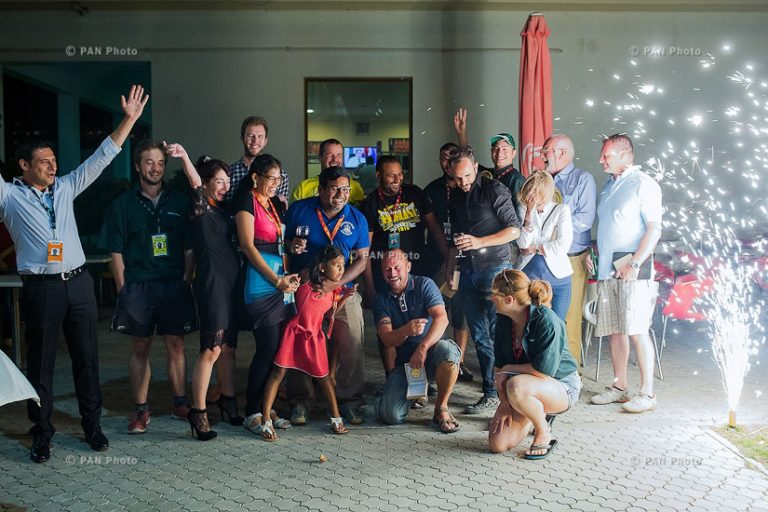 The teams head to Yerevan to conclude one of the top adventure road trips in the Caucasus region. Team Llanfair Railway consists of Rob and Tom clinched to the trophy settling on the first spot thanks to their adventurous souls and rallying skills.

The most interesting award of the Caucasian Challenge 2016 went to the Team Wonderlust King. Andras and Adam managed to grab the Bonkers Award which is given to the craziest team. They have taken their old and tiny Subaru Justy all the way to Armenia from Central Europe. They even slept in that small car on several occasions. During the award ceremony, Andras announced that they would continue their adventure towards Iran.

Adventure Travel in Armenia: The Caucasian Challenge 2016 is Run between Tbilisi and Vank on the Days 8-9

Liked this article? Looking for the latest in travel and adventure news? Then check out the rest of our articles at Adventure Herald. You can also like us on Facebook, follow us on Twitter or Instagram to keep up with our latest antics.
Tag adventure road trip in Caucasus Adventure travel in the Caucasus Best adventure car rallies Caucasian Challenge 2016 Top adventure road trips