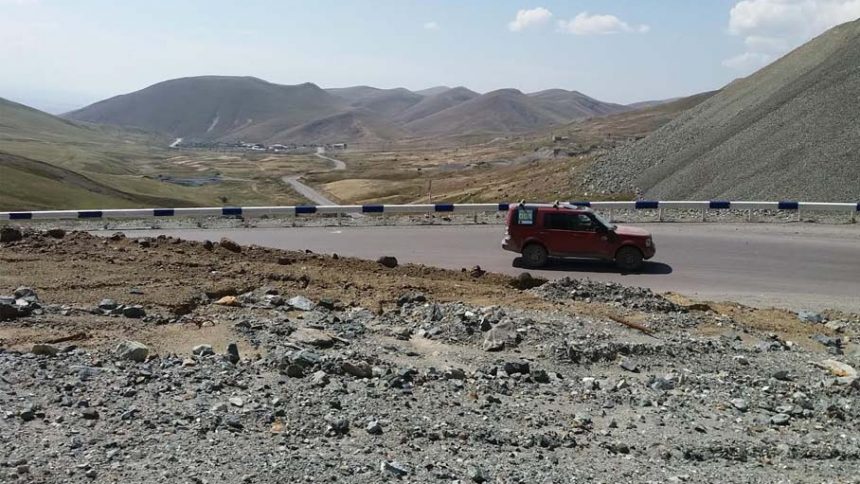 Adventure Travel in Armenia: The Caucasian Challenge 2016 is Run between Tbilisi and Vank on the Days 8-9

Adventure Travel in Armenia started on the 8th day of the Caucasian Challenge 2016 as the teams departed from the Georgian capital Tbilisi towards the biggest lake in the Caucasus Lake Sevan.

After taking a day off from car rallying in the Caucasus to do sightseeing in Tbilisi, the Caucasian Challenge 2016 participants hit the road towards the biggest lake in the Caucasus region, Lake Sevan.

The days spent in Georgia was a real treat for the participants as the Georgian cuisine and the beauty of nature in the Caucasus were essential factors in rendering this trip unforgettable. However, the Caucasian Challenge 2016 wasn’t over yet as the Travel Scientists prepared an adventurous route for the participants going through the highlands of Armenia towards the disputed region of Karabakh.

The small Armenian towns close to the border with Georgia had special restaurants decorated with the televisions and radios from the 70s. The participants had a chance to try the special delicacies of the Armenian cuisine like khorovats and shashlik in such restaurants. 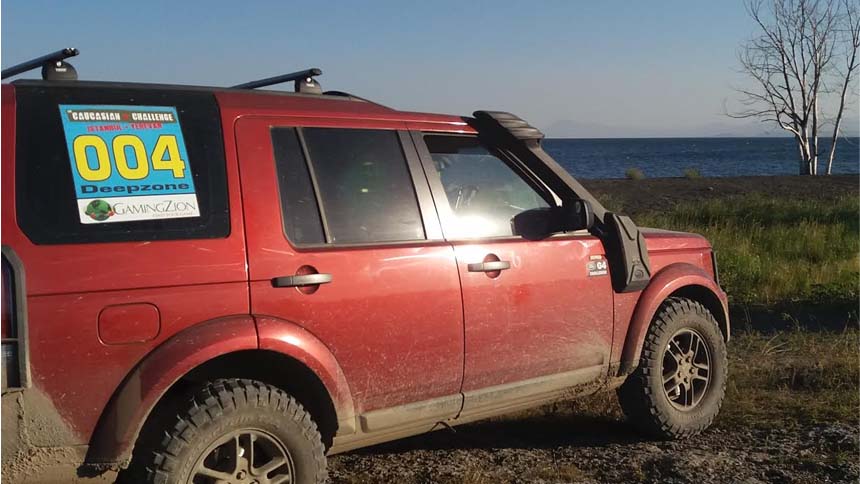 The first major stop on the way to Lake Sevan was Ijevan. The teams stopped in Ijevan to buy supplies at an open air street market. Thanks to the Russian speaker team members, the participants managed to buy very cheap fruits and vegetables in this market. Bargaining is the key. They also got to know about the Armenian variant of the Georgian sweet called Churchkhela. It is a sweet made of dried grape juice. It looks like a sausage from far distance; but it is quite sweet and full of nuts. It is special to such countries located in the Caucasus as Turkey, Azerbaijan, Georgia and Armenia.

After filling their stocks, the teams sped up towards the highlands of Armenia through the winding roads passing through green valleys. By the end of the day 8, the teams managed to make it the biggest lake in the entire Caucasus region called Lake Sevan. It is one of the world’s largest high altitude fresh water lakes, known by locals as the “pearl of Armenia.” It offers amazing view for people who are in love with the view of the setting sun.

Adventure Travel in Armenia took the Caucasian Challenge 2016 participants from Lake Sevan to an Armenian village called Vank in the disputed region of Nagorno-Karabakh on the day 9 of the adventure travel rally in the Caucasus.

Nagorno-Karabakh region is the subject of a conflict between Azerbaijan and Armenia since the 90s. There has been an official ceasefire since 1994. However, there are still conflicts between the Armenian and the Azerbaijani sides. There were bloody conflicts not long ago in 2016 as well. Vank is in a region which is a de jure part Azerbaijan and de facto administrated by the Nagorno-Karabakh Republic.

The political situation in the region is quite chaotic but it is a perfect place for adventure travel. The road between Armenia and Karabakh has been improved immensely recently. This development disappointed the rally participants who were after a huge adventure. But at least they encountered interesting sights and people along the way. For instance, the Team Care Bears stopped at the last town before the border called Vardenis for some minor repairs. They met a friendly mechanic who was willing to buy their rally car. The local man liked the rally car so much that he even offered to meet the rally participants in Yerevan to pick the vehicle up when the rally was over. Only thing they had to do was keeping the car in good condition until the end of the day. That is what they did; they entered the most controversial land in the region right away.

Between Armenia and the Republic of Karabakh there is barely a border. There is a hut posing as a border post. They stopped only one of the Caucasian Challenge 2016 cars and let them go after a brief questioning.

The most striking view on the other side of the border was a scene full of rusting tanks. They constituted a punctum on a beautifully decorated nature posing like an elegantly dressed noble princess. There were some other remnants of the bloody war left as spooky memorials to the victims. 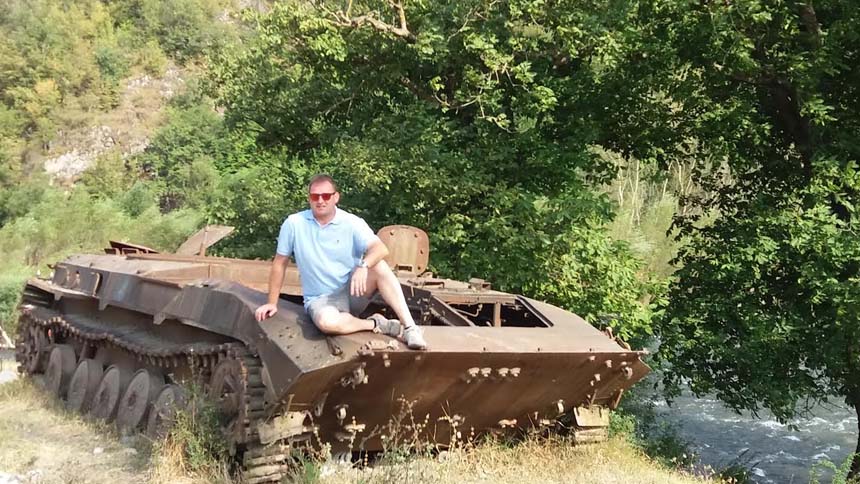 A rusting tank in Karabakh

The road was relatively smooth in this part of the journey. It gave the Team Llanfair Railway to relax in the thermal springs of Zuar. The monasteries in the region were in a state of despair. The neglected witnesses of history were posing as the representatives of the past of the region. The Team Care Bears discovered a church called St Astvatsatsin in a roadside wood. Dadivank Monastery was in a relatively better condition and it was quite impressive despite the fact that it was built more than a thousand years ago. The most impressive sight on the way was Gandzasar Monastery which sits on a hilltop overlooking green valleys. There the teams came across an austere religious ceremony, the strange sight of a local dancing on top of his horse. 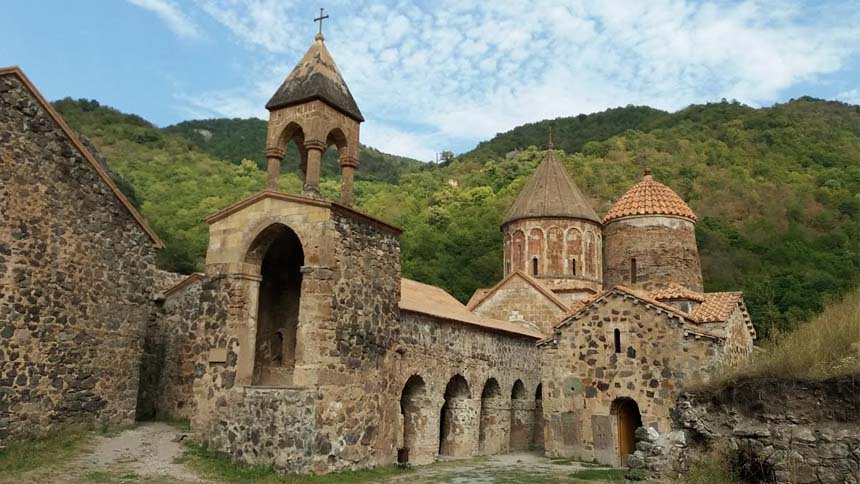 The strange things in the strange were not limited to this local, indeed. When the participants reached their hotels in their destination Vank, they realized they were going to sleep in the weirdest hotels they could find the Caucasus. The first hotel was the Hotel Eclectica owned by an eccentric oligarch. The special feature of this hotel was that it was designed in a similar way to the Titanic. It had a swimming pool and a decent restaurant. Therefore, the participants weren’t worried about being in a sinking ship. 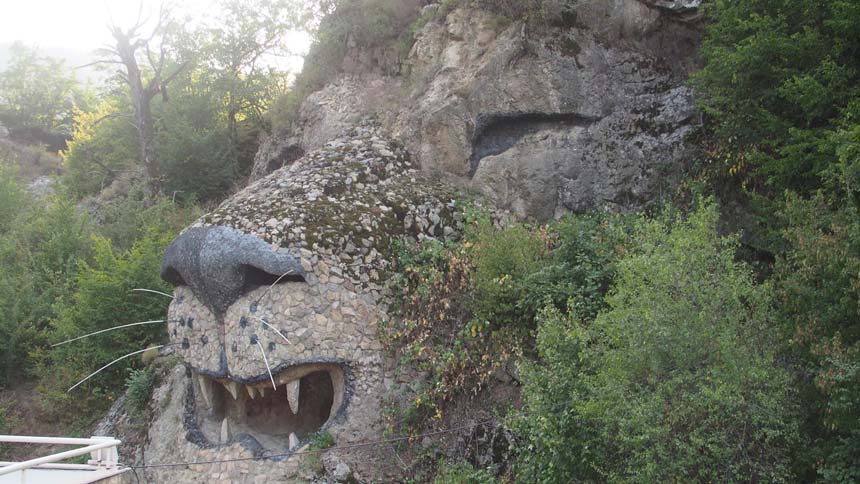 Rest of the participants, who didn’t dare to experience a similar feeling to Titanic’s Jack, decided to head to another hotel owned by the same oligarch. This time there was a huge lion built on to rock next to their hotel called Sea Stone Hotel. They deserved to take a good rest.