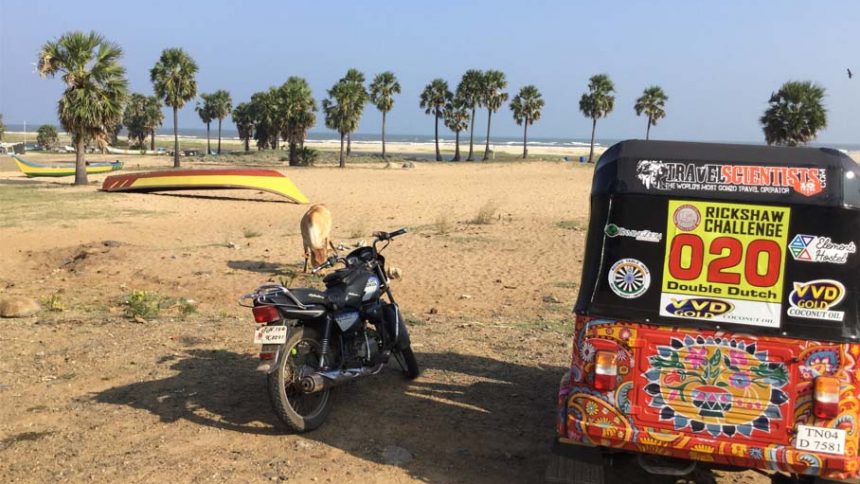 The legendary tuk tuk race in India, the Rickshaw Challenge Classic Run 2017 took place between the 28th of December and the 6th of January. The 1,000 kilometer-long Odyssey turned into a once-in-a-lifetime adventure for the 46 participants and 20 teams who raced in the crazy South Indian roads.

The 10th Rickshaw Challenge Classic Run, which featured in the best must-experience adventures list of Lonely Planet, started smoothly and reached the crescendo by the last day. The anniversary rally began with the official registration and briefing on the morning of the 28th of December in Chennai’s Deccan Palace Hotel. The Travel Scientists staff trained the participants in how to ride rickshaws properly. It was the moment when the participants realized that rickshaw riding is not a piece of cake. Some of the participants could not even manage to start the famous three-wheel vehicles of the Southern Asia. 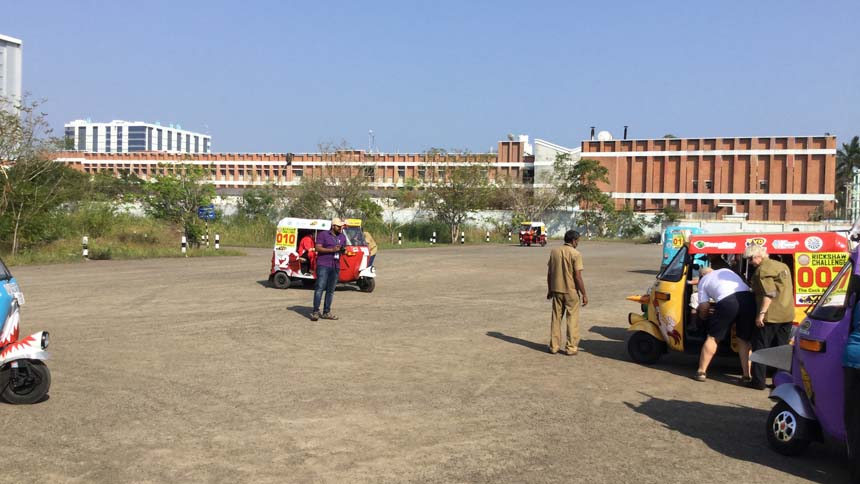 After the training session, the participants hit the road to practice. After practicing on the practice track, they set off to fill the tank and amuse the locals. Colorfully pimped rickshaws ridden by foreigners dressed in peculiar costumes can be amusing for locals; don’t you think you?

The real adventure began the next on Thursday when the Rickshaw Challenge Classic Run 2017 hit the road finally. The representatives of the Round Table of India, which is the charity partner of the Travel Scientists, wavered the checkered flags to start the 10th Rickshaw Challenge Classic Run. The epic journey offered more beautiful sights than Bilbo Baggins’ journey. The first stop was the 17th century Dutch fortress of Sadras and the ruins of Fort Alambarai. Truly breathtaking places they were. The day finished in the old French colonial town of Pondicherry. All teams managed to reach the final destination including the team whose rickshaw had to undergo engine change.

Adventure travel in Tamil Nadu continued between Pondicherry and Thanjavur on the third day.  Driving around Pondicherry was quite easy compared to Chennai’s over-crowded streets. Before starting the 177-kilometer-long journey towards Thanjavur, the participants stopped at a local school for the hearing impaired children. The Rickshaw Challenge Classic Run 2017 racers paid a visit to this special school and offered presents to the children as a part of the charity event organized by the Round Table India.

After making children happy, it was time to hit the road again. The participants dressed in such incredible costumes like Superman and giant chicken continued their three wheel adventures through the destination of the day. Several teams couldn’t make it to the hotel in Thanjavur for the flag down time at 6:30 pm. Of course, these teams lost points due to being late.

The fourth leg of the tuk tuk rally was 207 kilometers long towards Madurai, the religious center of the state of Tamil Nadu. You can find temples and historical sites in almost every corner in this beautiful city. The teams had to stop many times to admire these beautiful landmarks. 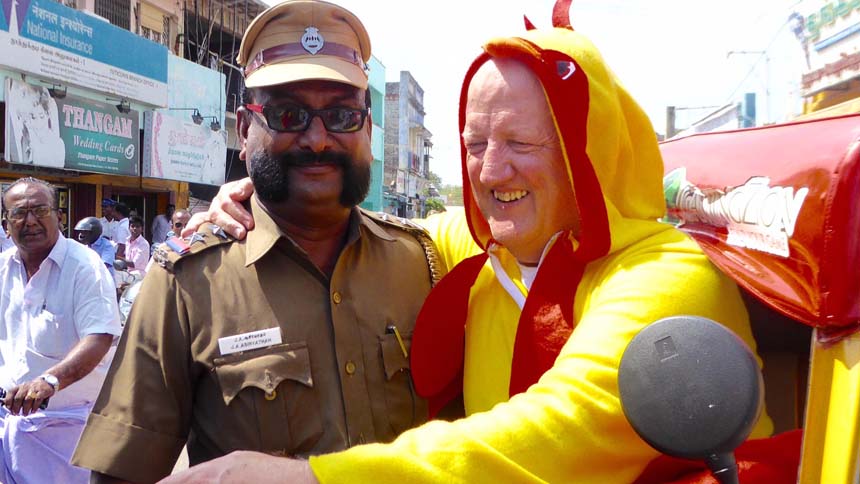 Team The Cock and Pullet and an Indian Police Officer

Being in Madurai was an unprecedented experience. However, reaching there was a little bit problematic as the teams had to choose taking either the slow and overcrowded state roads or the paid highway where Indian drivers love performing high speed slaloms. Fortunately, the teams managed to complete the state without a serious accident. Well, there was an accident which we couldn’t decide whether it was serious or not. The team Cock and Pullet crashed their mirror in a parked bus which turned out to be a police bus. Luckily, the racers managed to escape the territory before the Indian cops interrogating them.

The last day of the year and the adventure of the 4th day of the race faded away simultaneously. The participants enjoyed the New Year’s Eve party like there was no tomorrow. Warning! We are not utilizing hyperbole here. Some of the participants actually had to pay for the fire extinguishers which they sprayed in their room.

The Rickshaw Challenge Classic Run 2017 Day 5 did not witness any real challenge except for the attempts of curing hangover. After spending a full day in Madurai resting and doing sightseeing, the teams had towards Tuticorin through a 137-kilometer-long route. The organizers granted another day-off for the participants who found themselves in the shoes of Alice of the famous story of Alice in Wonderland.

What made the Tuticorin leg of the trip special was the Pongal Festival Celebrations in the Bremajothi Farm. The 60-acre orchard, which constitutes a home to countless of exotic trees, witnessed an unprecedented Pongal Festival. But before the celebrations started, the teams paid a visit to the VVD Coconut Oil Factory that is probably the best smelling industrial facility in the world. 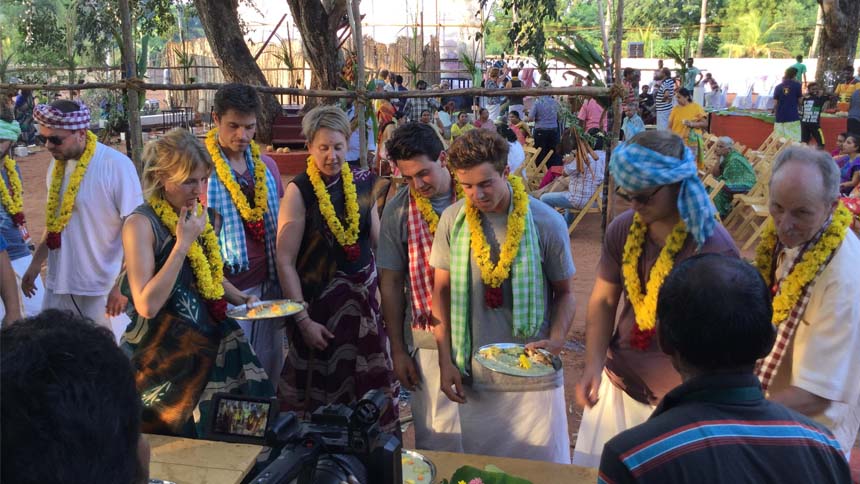 After the visit to the VVD Factory, the teams had to the festival area, where the South Indian rice harvest festival would take place. The owner of the plantation Mr. Bremanandam (a.k.a The Tiger) prepared a special festival for the Rickshaw Challenge Classic Run 2017 participants earlier than the actual Pongal date which is the 13th of January.

Local artisans decorated the guest house which matched the vivid design of the rickshaws. The colorful event managed to catch the attention of the local media. There were journalists, elite guests from Tuticorin, 46 participants from all over the world and amazing traditional Tamil rice dish. However, it does not mean that there was no challenge for the participants. This time they were given ingredients and a basic recipe to prepare the traditional Pongal dish. Of course, they received help from the local ladies who did not have any English knowledge. That is what we call a real challenge.

The Legenda Trio managed to clinch to the prestigious award of the Rickshaw Challenge Classic Run 2017 Pongal Champions. The runners-up were the Blackforest Express and World Teacher Aid.

After having fun Pongal party at the Bremajothi Farm dancing to the songs played by a local rock band and a DJ accompanied by a modern dance group from Madurai, the teams started the engines of their rickshaws towards Tirunelveli the next day. Fortunately, the next leg was only 60 kilometers. The mission of the day was visiting the Kanthimathi Nelaiyapper Temple.

After Tirunelveli the terrain changed from smooth to harsh. The Southern Indian ricksaw adventure became extremely challenging at this point as the participants had to climb over the hills by their tuk tuks which had 7-horsepower engines. The view was spectacular but sharp turns and tight roads demanded too much attention that enjoying the panorama wasn’t the primary objective for the racers. Some of the rickshaws broke down on the way. Fortunately, the experienced mechanics of the Chennai Garage were prompt in aiding the teams. 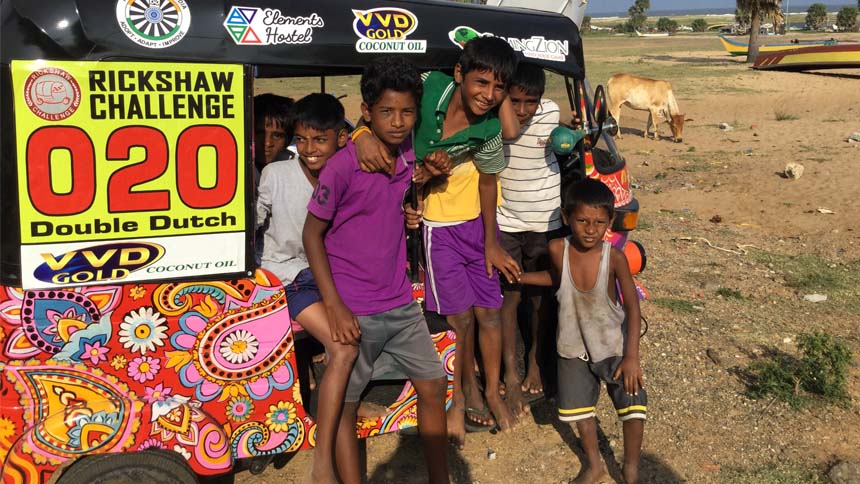 On the eight day the teams head towards Kanyakumari, a popular tourist destination on the southern tip of India. The first stop was the Sorimutthu Temple which is dedicated to Lord Shiva. The task was taking a photo in front of this temple. Well, it is not as easy as you think, especially when there are a lot of pilgrims around. The next stop after this beautiful temple was the Ppanasam Dam, a truly stunning sight. The teams visited the Manimuthar Falls to bath like the locals.

The teams welcomed the sunset in Kanyakumari, the tip of India, where you can watch the sun set behind the three seas – the Bay of Bengal, the Indian Ocean and the Arabian Sea – at once if you stand at the famous “Sunset Point.”

The last 90 kilometer run took place on a beautiful beach road towards the capital city of the state of Kerala, Thiruvananthapuram (or you can simply say Trivandrum). The heavy traffic created by the pilgrims caused serious problems for the inexperience rickshaw drivers. The border crossing point in Kerala was not as easy as expected. The state brought ban on alcohol not long ago; therefore, the border guards checked every colorful rickshaw belonged to the participants. This also meant that there wouldn’t be any champagne shower at the award ceremony.

When the teams reached the hotel, they encountered an army of journalists. It turned out that they were covering a meeting presided by the Chief Minister of Kerala. Unfortunately, the Rickshaw Challenge Classic Run 2017 participants didn’t receive the desired media attention in Kerala unlike in Tuticorin. 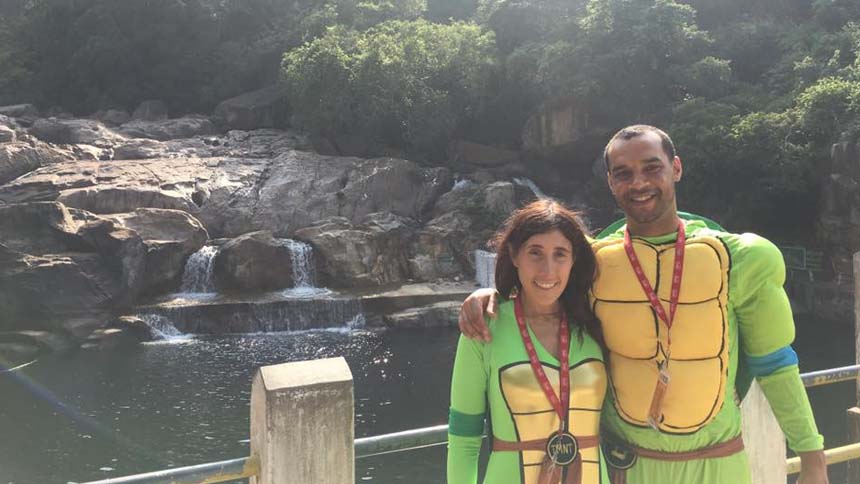 The newly-wed couple from the USA, , the Team Magic Bird earned the title of the Rickshaw Challenge Classic Run 2017 Champions thanks to their extravagant costumes and achievements in completing all the tasks during the rally. The Bonkers Award, which is given to the craziest team, won by the Cock and Pullet team that gained popularity thanks to their giant chicken costumes. The team World Teacher Aid won the Charity Award raising $12,000 for the charity projects of Round Table India. 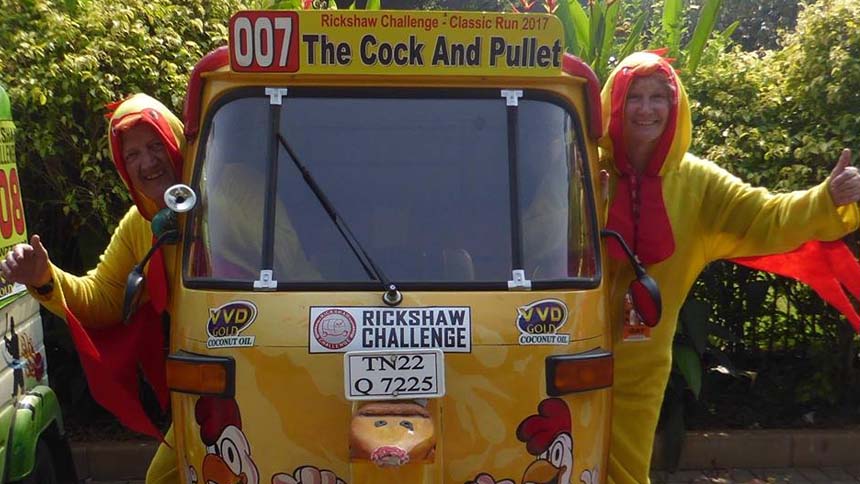 Team The Cock and Pullet