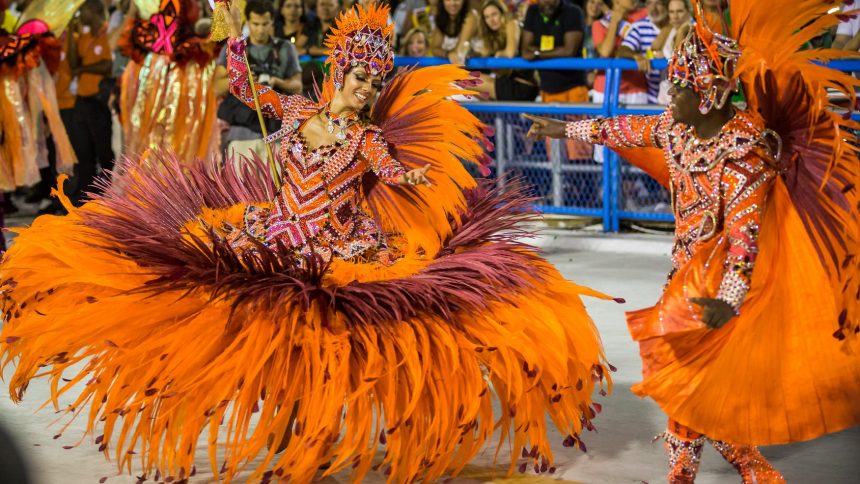 Traditional Festivals Around the World In 2016

Plan a year of adventure travel to some of these vibrant, loud and spectacular traditional festivals around the world. 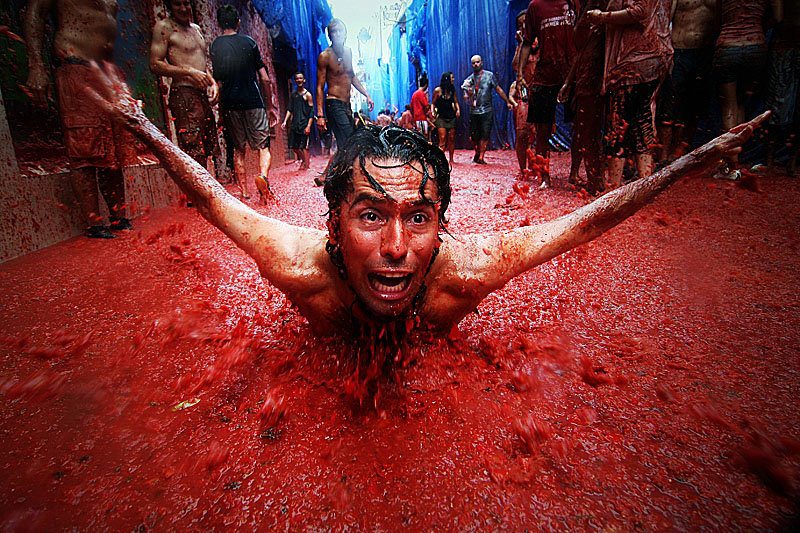 La Tomatina is essentially a tomato-throwing festival that takes place in eastern Spain in the town of Bunol each year on the last Wednesday of August. It reportedly dates back to a feud that took place in 1945 where tomatoes were thrown in an angry street fight, but by now the food fight occurs each year in the name of fun, and people come to Spain from all over the world to take part. Nowadays the fight only takes an hour and there are strict rules (like only squashed not whole tomatoes can be thrown), although given everything is covered in tomato-y sludge we reckon the clean up is much longer.

If you like the idea of throwing things consider the Songkran Festival in Thailand where you pelt each other with water or the Battle of the Oranges in the Italian city of Ivrea where you throw…you guessed it…oranges. Here is our detailed guide of La Tomatina.

Running of the Bulls, Spain 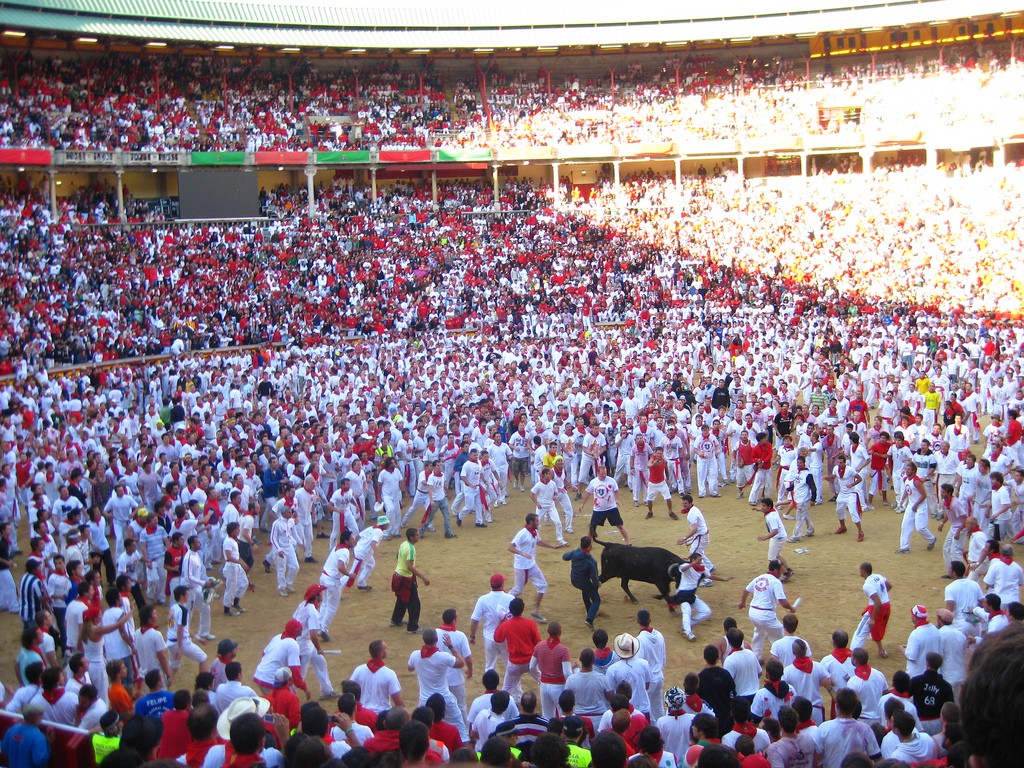 The most famous Running of the Bulls festival takes place in Pamplona in northern Spain in July. Fences are used to block off side-streets and corral the half-dozen bulls to chase the men and women in front of them. The bulls run almost one kilometer before entering the bullring (pictured above) with runners trying to run ahead of the bulls and remain uncaught. Nevertheless, each year there are injuries and more than a dozen deaths – most of them from goring. Most runners wear white clothes and a red scarf around their waist and neck, while others wear blue or colored clothes as a sign of bravery as these colors attract the bull’s attention. 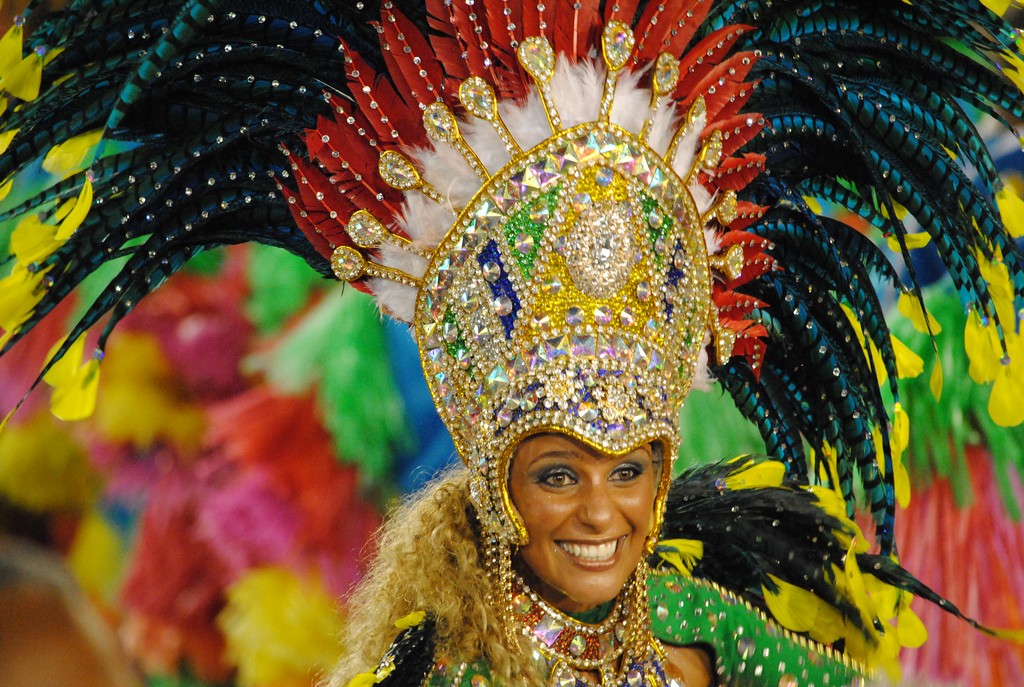 Rio Carnival is one of the world’s most colorful and loud festival-cum-parties. Taking place in February millions of people hit the streets of Rio de Jeinero in the lead up to Lent (ahead of Easter). Aside from the party people there are floats, samba dancers and men and women dressed in elaborate costumes. Apart from the street parties there’s a ticketed event at Sambadrome each year. 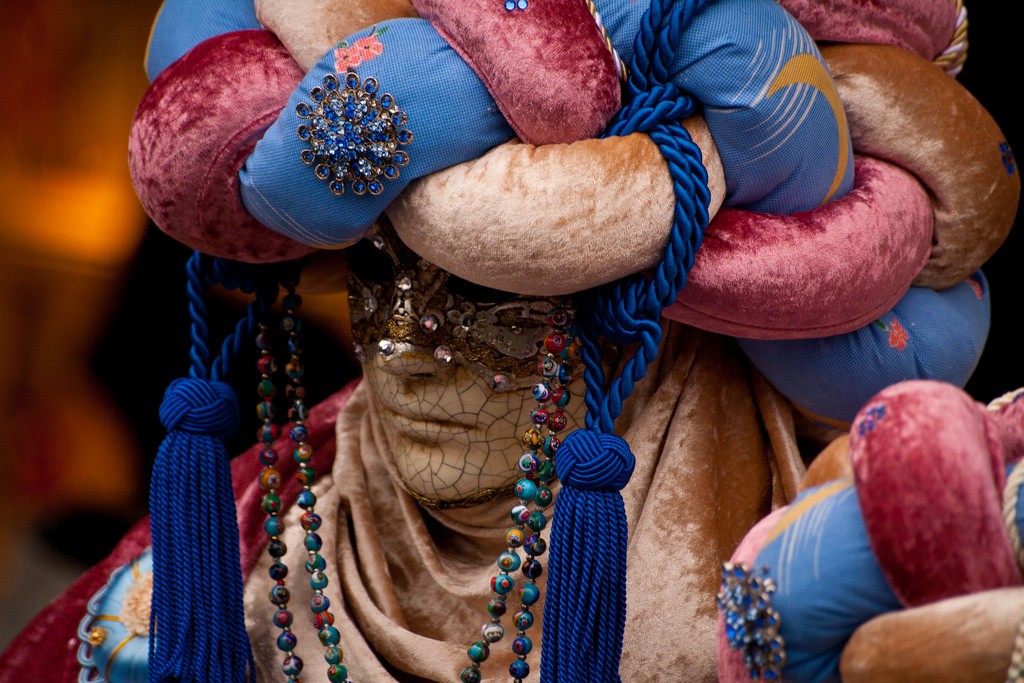 Like the Rio Carnival, the Carnival of Venice is held in the lead-up to Lent (and the Lenten fast). It’s about making lots of noise and wearing beautifully crafted Venitian masks as a way to celebrate before the more somber Lenten period. There are different types of masks although the Colombina is most well-known – it’s the half mask that is decorated with glitter, feathers and various colors. Masquerade balls are commonly held around this time so everyone gets to try out their new masks. 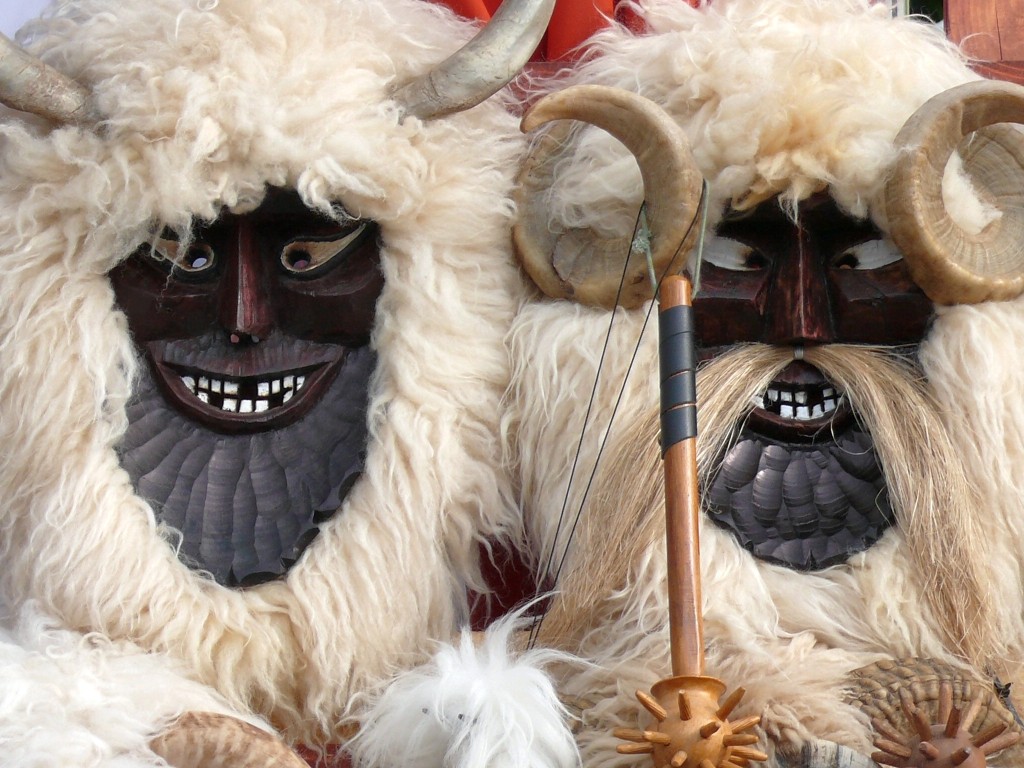 Busojaras takes place in the southern Hungarian town of Mohacs and it’s best known for all of the men dressing up in frightening furry outfits. As with the previous two festivals, it’s held just before Lent starts at the end of the period known in Hungarian as “farsang.” There are two legends, one is that the local people of Mohacs hid in nearby swamps from invading Ottoman troops and were told by a mysterious force to start carving frightening masks and that when the time comes they should make loud noises and scare away the Turks. Another myth is that the scary outfits are meant to scare away winter itself. The event is UNESCO World Heritage listed and brings thousands to the tiny town as the men chase women around making loud noises. 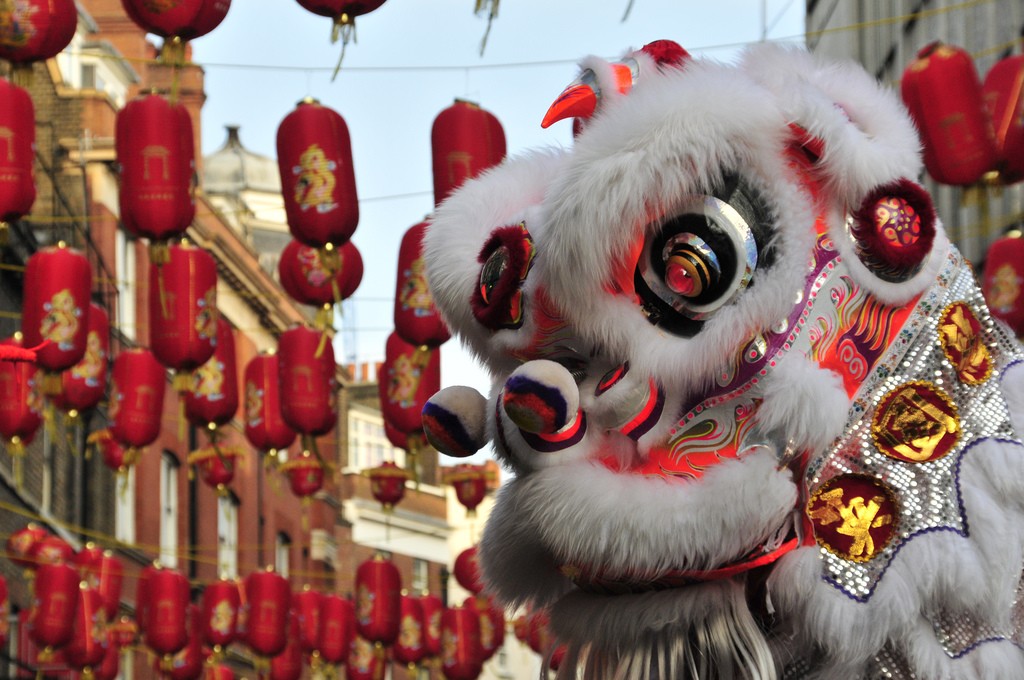 Chinese New Year is held all over the world, not just in China, and marks the changing of the lunisolar Chinese calendar. In 2016 it will be held on February 8 and it will mark the start of the year of the Monkey. The new year celebration is marked with food, the gifting of red envelopes with money inside, fireworks, red decorations like lanterns, and captivating street performances like the lion or dragon dance. You don’t have to be in China to attend a New Year festival as many countries with large Chinese populations also put on a fine show! 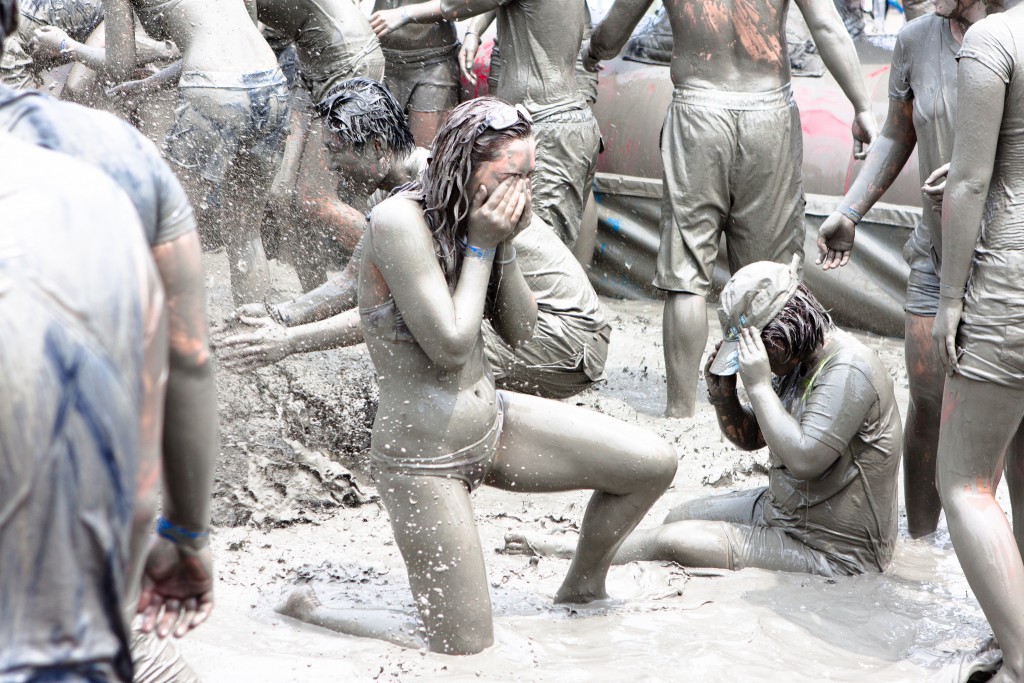 Boryeong is a crazy old place in South Korea where locals and a couple of million visitors pretty much go crazy with mud from the local mud flats. It was originally meant to be just a marketing campaign for mud cosmetics – so this is really the least “traditional” festival on this list – but it’s grown into mud-fight like no other. From mud sliding to mud wrestling this is the perfect festival for adventure travelers to unleash their inner child. 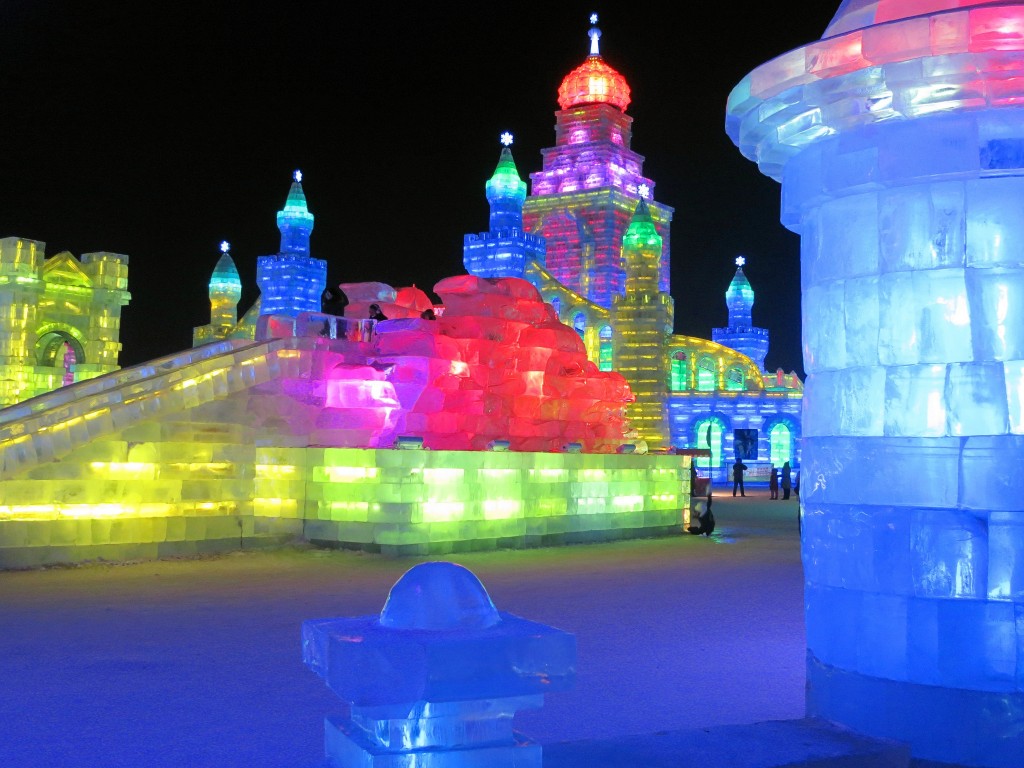 Harbin is located in northern China and receives cold winter weather from Siberia, so it’s the perfect place to hold a snow and ice festival. Most years there’s a theme and giant blocks of ice are carved and sculpted to form the beautiful creations. Multi-coloured lights are added to give even more life to the icy creations of the talented ice sculptors. The event lasts most of January and February, although it’s possible to book a multi-day tour that includes the Harbin Ice Festival. The festival has origins and links to the ice lanterns made by peasants and fishermen during the Qing Dynasty. Nowadays the sculptures are elaborate and huge though. If you do get the Harbin remember the event takes place across multiple locations including Sun Island, Ice and Snow Amusement World, and Zhaolin Park. 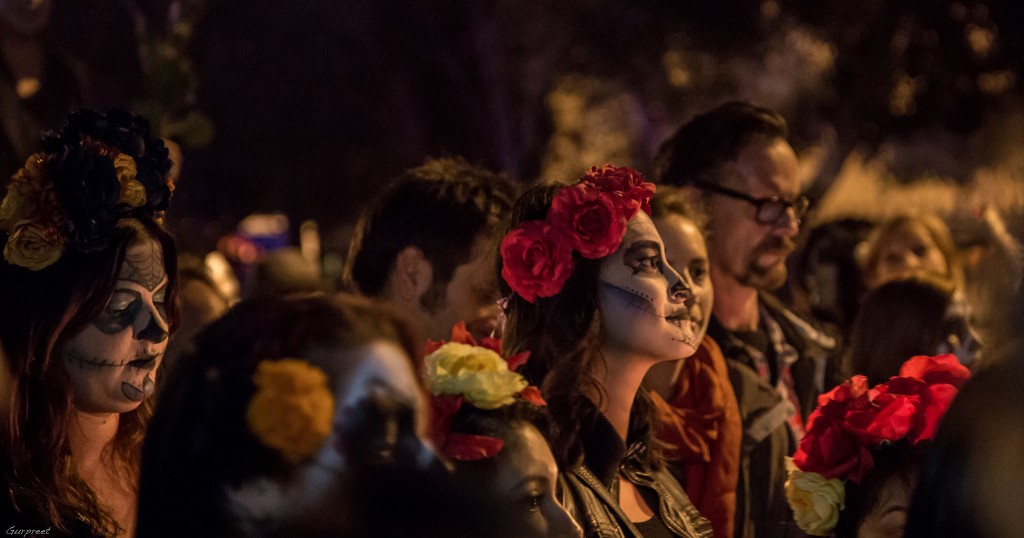 The “Day of the Dead” (aka Dia De Los Muertos or Dia De Muertos) is celebrated throughout Mexico with the aim of remembering the dead and helping the dead pass through on their journey. It’s held on October 31, November 1 and November 2 coinciding with other celebrations like Halloween, All Saints Day and All Souls Day. The most visual aspect of the festival includes wearing scary and not-so-scary masks and face paint. Despite the name, it’s not a sad festival, it’s more about celebrating the life of the dead with parties and food. Skeletons and sculls are common motifs of the festival, but these are combined with flowers too. 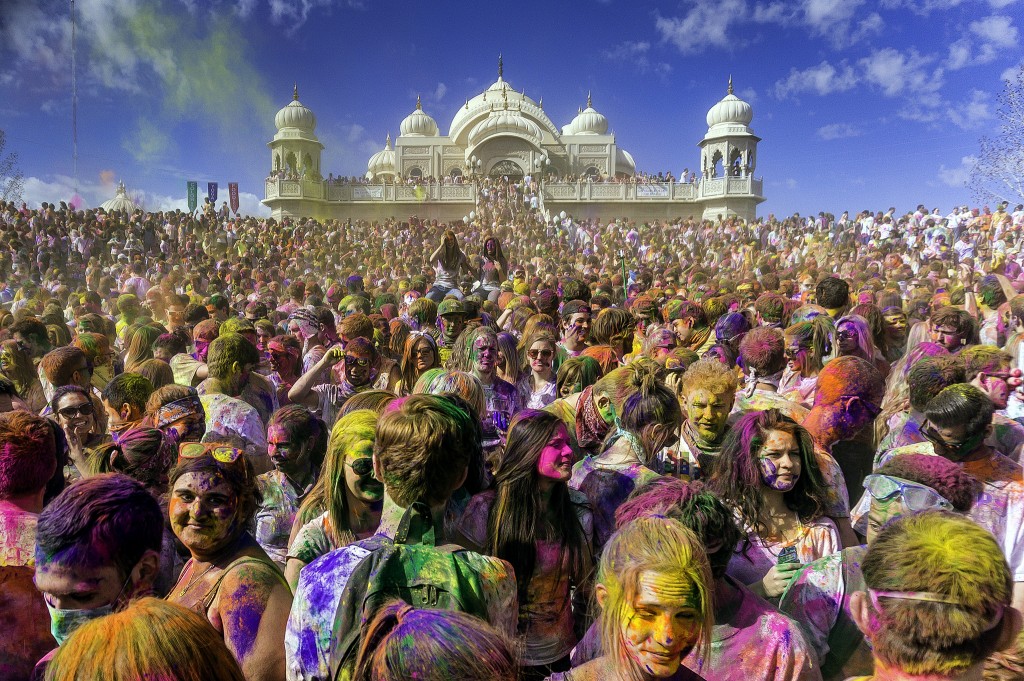 Holi is an ancient Hindu religious festival that’s about color, light and love ahead of spring. The celebration involves colored powder and color water being sprayed and thrown everywhere. In 2016 Holi will be held on March 23. The colors and the emphasis on happiness and laughter are symbolic of the triumph of good over evil, spring over winter. If you can’t get to India or Nepal for the main celebrations there are plenty of Holi-inspired events elsewhere in the world. 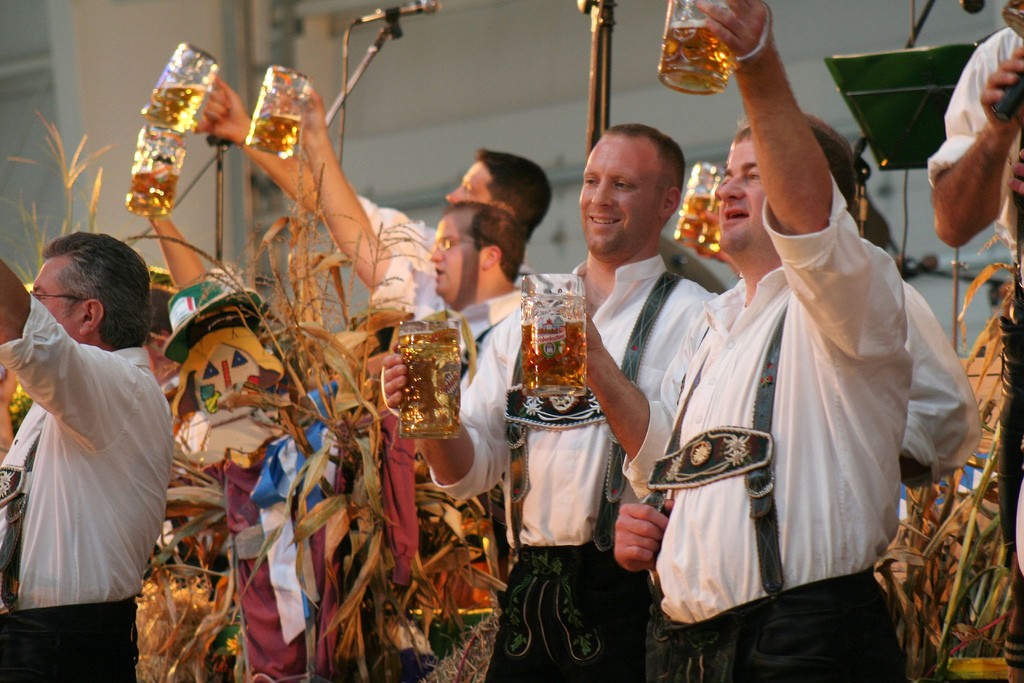 Only the Germans could come up with a festival where the main aim is to drink liters of beer. Despite the name, it’s held in late September there’s a carnival atmosphere with rides on the grounds of Oktoberfest, but the main drawcard are the huge marquees set up by beer companies. Inside you’ll find row-upon-row of tables with men and women each drinking from GIANT mugs of beer. The women are wearing traditional dress known as dirndl, while many wear lederhosen. To say “cheers!” in German, you say “Prost!”

Liked this article? Looking for the latest in travel and adventure news? Then check out the rest of our articles at Adventure Herald. You can also like us on Facebook, follow us on Twitter or Instagram to keep up with our latest antics.
Tag Boryeong Mud Festival Carnival of Venice Chinese New Year Dia de los Muertos Harbin Ice and Snow Festival Holi India La Tomatina Mohácsi Busójárás Oktoberfest Munich Rio Carnival Brazil Running of the Bulls Pamplona traditional festivals traditional festivals around the world traditional festivals in 2016