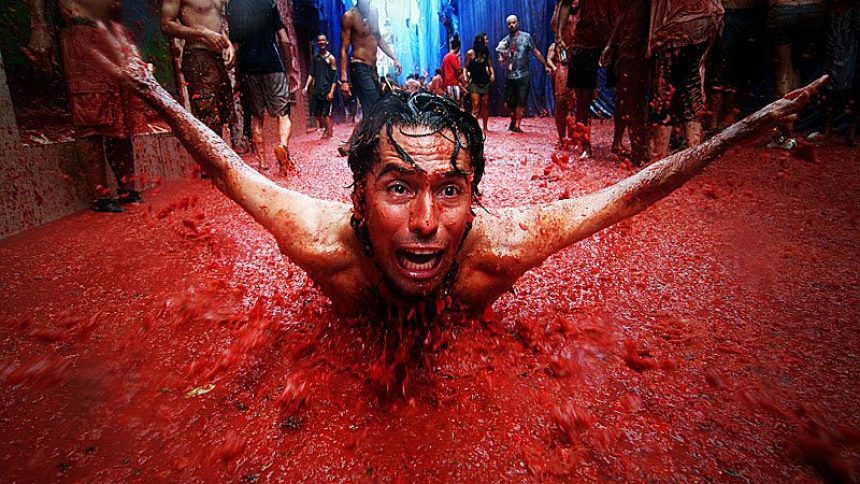 La Tomatina – Anarchy in Spain at The End of August

Like every last Wednesday in August, La Tomatina, the world’s biggest food fight festival, the definition of chaos, and for sure an extreme adventure that has no equal, will take place on 26th August in the Valencian town of Buñol.

For one hour, anarchy will take over and 20,000 participants will bombard each other with about 60,000 kg of tomatoes, which are grown especially for the festival.

It all begins with the participants trying to climb up a greased pole, on whose top there is some ham. As soon as a brave one succeeds in pulling the ham of the pole, the starting signal for the battle – water guns fired into the air – is given. Since the climbing is a quite slippery and difficult task and anticipation grows too strongly, sometimes the ham-dropping itself is skipped, but not without watching some unlucky ones slide down the pole, just a few centimeters before reaching the top.

If you want to participate in the fun, you need to follow some simple rules:

· Buy a ticket. Since 2013 there is no entrance without one.

· Don’t bring any hard or sharp objects like bottles, that could cause injury. The only weapons allowed are tomatoes, and even those should be squashed before throwing them, to minimize pain and injury.

· Pay attention to the trucks, let them pass and always keep a safe distance.

· As soon as you hear the second shot, throwing immediately has to stop.

During the fight, goggles, gloves and closed shoes are of advantage. If you insist on bringing a camera, then it should be a waterproof one.

One of the many legends says that it all started in 1945, during a parade, when some young people accidentally caused a participant to fall off of one of the parade vehicles. That person got so enraged, that he randomly started throwing tomatoes from a vegetable stall, that just was in the wrong place at the wrong time. Soon others joined in and only the local police could stop them.

The next year, they brought tomatoes from home and repeated the whole fun. The tomato battle was banned on and off during the next years, but grew so popular that in 1957 it took place as official event, with rules and restrictions. Since 1970, La Tomatina has been a regular event, that grew bigger and bigger every year. With a population of 9,000, Buñol was overrun by up to 50,000 participants at times – hence the introduction of an entrance fee and limited tickets.

While the tomato battle is the highlight of the week-long festival, it definitely is not the only reason to visit Buñol. Don’t miss the parades, fireworks, and the food and street parties accompanying La Tomatina. Walking around the medieval streets of the town in the night before La Tomatina, breathe in the smell of tomatoes and paella in huge pans over open fire, and get a taste of the real Spain.