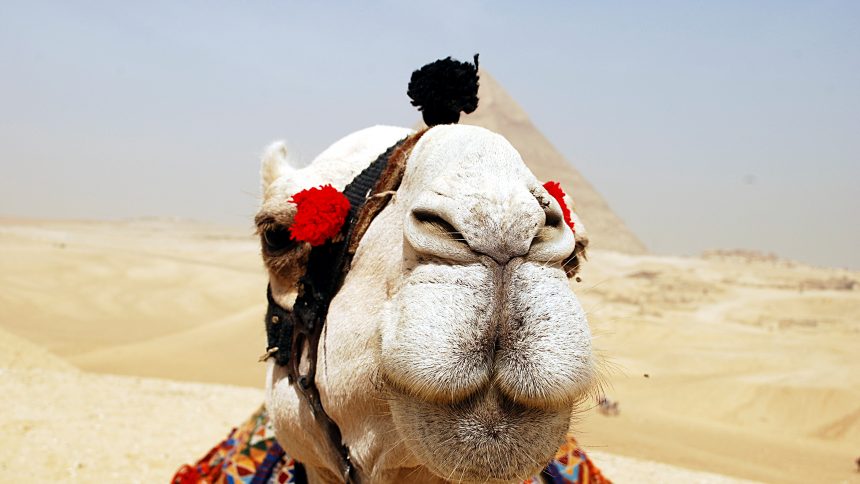 While many are no strangers to horseback riding, camel riding still has the touch of exotic mystery and no trip to the Middle East, the Arabian Peninsula or Northern Africa is complete without a camel trek, be it just for half an hour or several days across the Saharan desert, following age old trading routes from from one oasis to the next.

Opinions are divided, since some consider camels as being some of the cutest and most loyal animals that exist, while others think that they are the most malicious, vengeful, evil beasts that wander on Earth. And while camel riding is often described as the most uncomfortable experience on the planet, nevertheless nothing can compare in beauty and atmosphere to riding into the desert sunset on a camel’s back.

You definitely should make up your own opinion, and for that nothing can beat firsthand experience. Our tips for camel riding help you to make it a pleasant, memorable experience that you will definitely not regret.

Some Facts About Camels 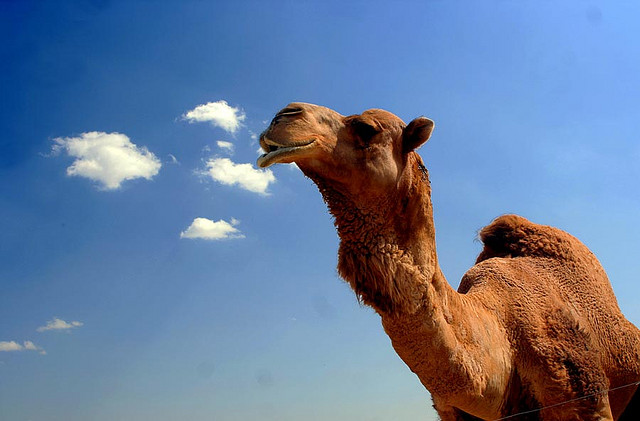 Camels, the ships of the desert, have been plowing through Arabia and Northern Africa for centuries, being the most important means of transportation and pack animals for a journey through the sand dunes.

Probably first domesticated in Somalia and southern Arabia around 3000 BC, by now the only wild camels left are the ones in the Gobi Desert. Camels are tall beasts and can seem quite intimidating with their long legs and reaching a height over 2 m at the tips of their humps. They like to give the impression that they are complete strangers to quick movements, but they can reach up to 65 km/h for short distances, so you better buckle up, or at least hold really tight on to your saddle.

Heroes of legends and poems, today they are still the most valued possession for many families, even though their main task is not to carry exotic spices, rare oils and precious garments across the desert anymore, but tourists and their camera equipment. 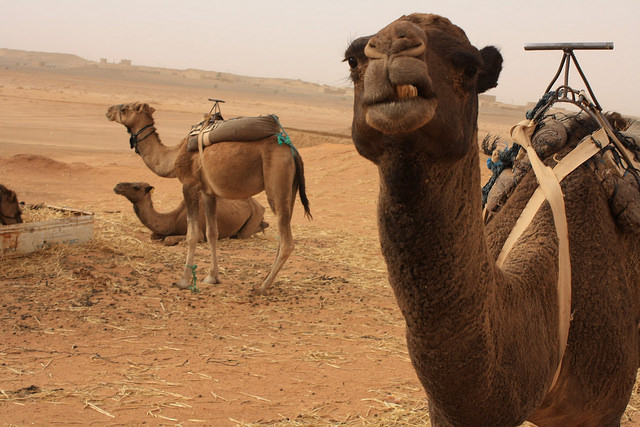 Don’t just run towards the first snoozing camel you see loafing around and be surprised, when its reaction is not as pleasant as you expected. Wait till your guide tells you which one he chose to be your temporary travel companion, then approach slowly.

Give the camel a chance to get used to you and also allow yourself to get used to the camel, its smell, its sounds and its body fluids. Talking about the latter, you might not want to stand directly in front of the camel, since you could be hit by spit and snot. If you can’t escape, just take it as a sign of your camel’s affection for you.

Don’t approach the the camel from behind, since it will kick if you surprise it too much. Its long legs might seem skinny, but there is the force of a 500 kg animal behind them. What might hit you even harder than a camel’s leg, is the smell that you temporarily encounter on its backside, so rather approach from the other direction. 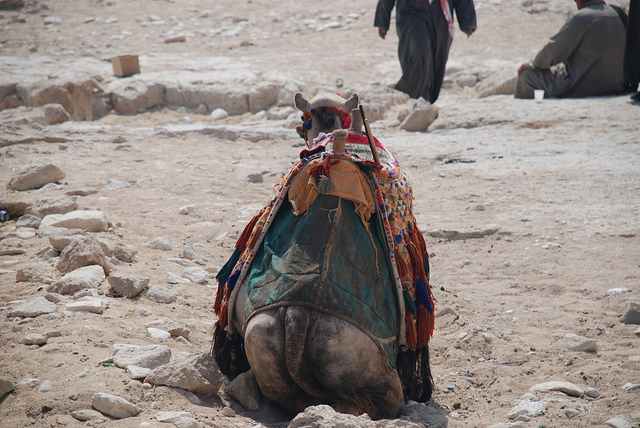 Make sure that your guide is holding the camel down while you are mounting it. It will be lying on the earth, so it’s quite easy to climb on its back. To get on, you might have stirrups, but depending on where you are, they are usually not used for camel riding itself.

Hold on to the wooden knobs in front of you and behind you, and enjoy the ship-like back and forth swaying while you journey along the sand dunes. 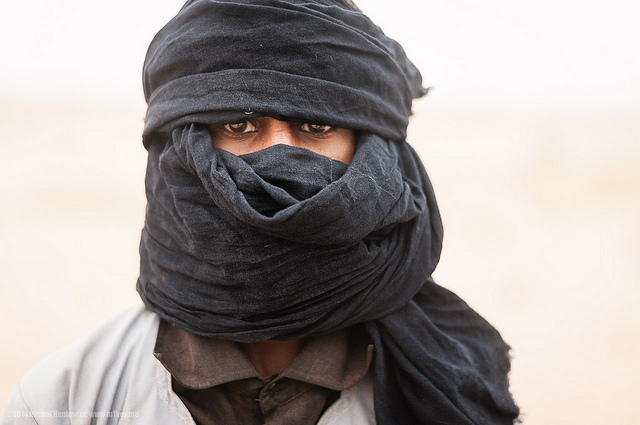 Choose anything comfortable, that gives you flexibility and covers as much of you as possible, to protect you from sand, sun and the itchy camel hair. Since extreme temperature changes can happen within very short times, especially if you ride in the early morning or at night, layering your clothes is much recommended.

Don’t forget a hat, or even better a scarf, that protects your head from the sun, and that you also can wrap around your face, just leaving a small slit for your eyes, as protection from sand. Your guide can show you the most effective wrapping technique. 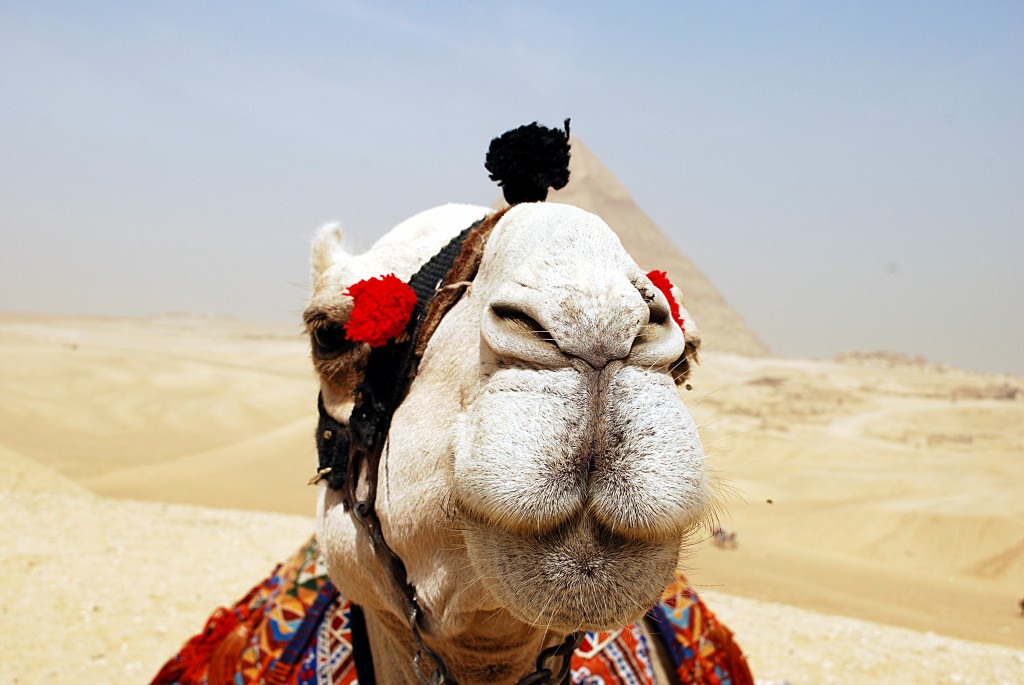 Always be nice to your camel! They are said to never forget anything. So if you are nice to your camel, calmly talk to him and slip him an apple every now and then, you will have one of the most loyal and caring friends. But if you mistreat your camel, shout at it, or even worse, hurt it, you might better set up your testament, because your camel will not rest till it has taken revenge, even if that will be 4 years later, in another country, on another tour.

Liked this article? Looking for the latest in travel and adventure news? Then check out the rest of our articles at Adventure Herald. You can also like us on Facebook, follow us on Twitter or Instagram to keep up with our latest antics.
Tag animal travel camels desert travel middle east north africa tips travel tips