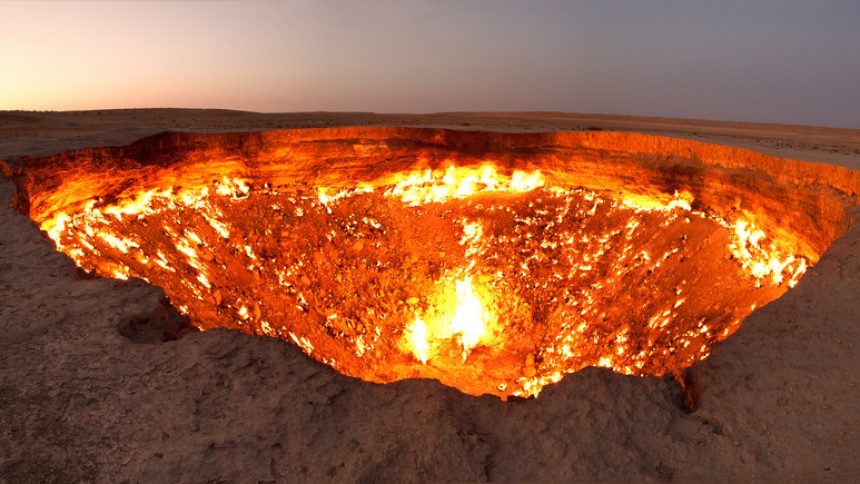 Turkmenistan is one of the world’s most mysterious countries, tucked inside Central Asia, this secretive country has the toughest visa requirements in the whole region, so it goes without saying not many people visit Turkmenistan. But visa issues aside, not many people know what Turkmenistan has to offer for the adventurous traveler, from ancient lost cities to the Gate Way to Hell, and much more.

Here are some reasons Turkmenistan is worth the red tape.

Turkmenistan was once one of the core hubs on the Silk Road, where the city of Merv was once of the greatest cities of the Islamic world. Today, its ruins lie scattered in a desert landscape after the sons of Genghis Khan laid the city to waste and slaughtered its inhabitants. It’s a UNESCO World Heritage Site today. Apart from Merv, there are also other historical wonders like Konye-Urgench, a backwater today but also another great center of the Islamic world, which fell to Genghis Khan after a 6 month siege, and was eventually finished off by Timur, who considered the city a rival to Samarkand. Most of the city is buried underground, but you can still catch a glimpse of its greatness in the variety of monuments scattered around. 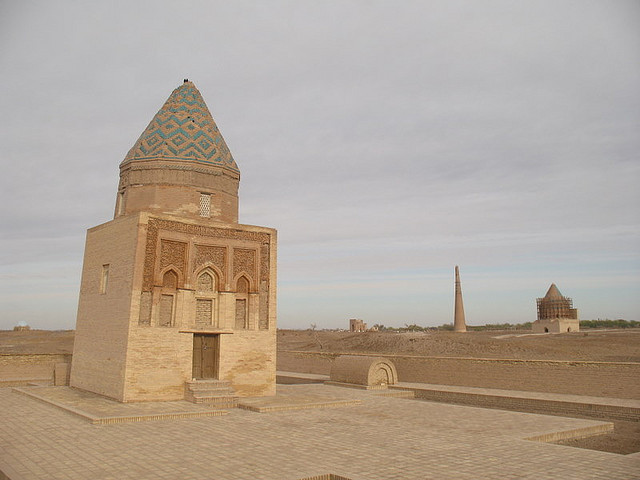 Another historic city is Nissa, which was founded by the Parthians in the 3rd century, but like the rest of Turkmenistan’s great cities, was razed to the ground by the Mongols. 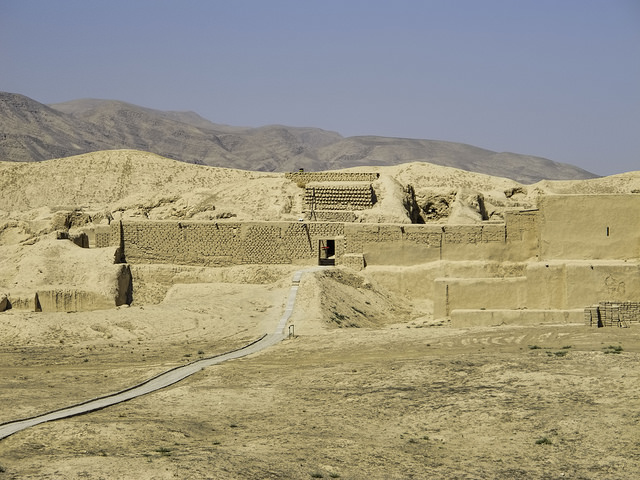 Tolkulchka Bazaar is one of the iconic Central Asian markets, where you can get everything from carpets to camels, jewels to food. This market sprawls out in the deserts surrounding the capital Ashgabat. This is the place to come if you’re looking for haggle, and if you don’t like haggling, well tough, you have no choice, unless you simply want to come, look and just absorb the surroundings. 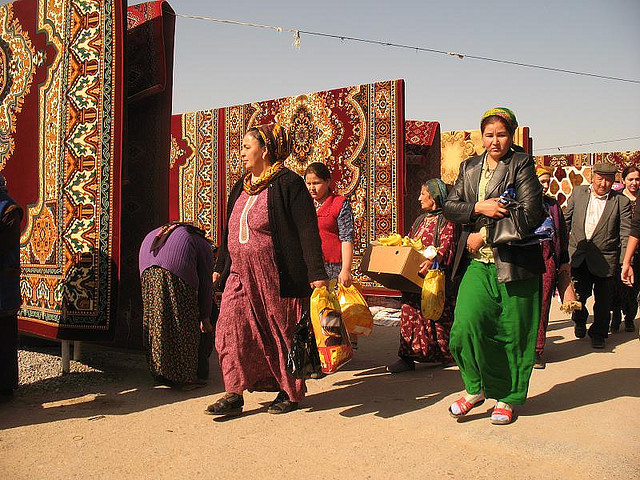 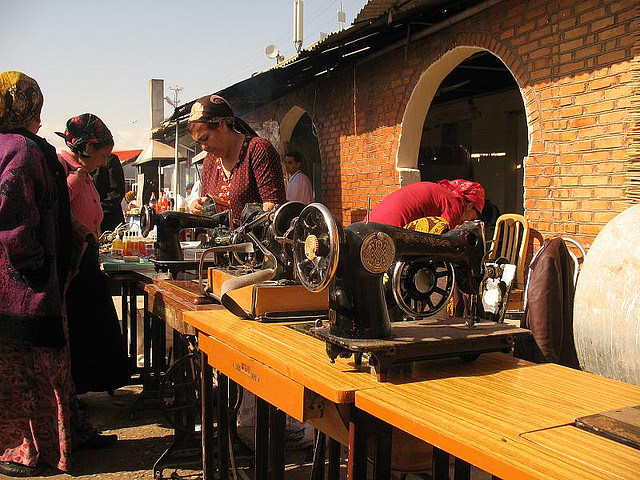 Visit the “City of Love”

Ashgabat in Arabic means City of Love, and is a surreal city filled with lavish palaces, golden mosque domes and one of the largest flag poles in the world! Because most of the historic city was leveled to the ground by an earthquake, today it was rebuilt in a Soviet style with futuristic accents. There is no city like it. 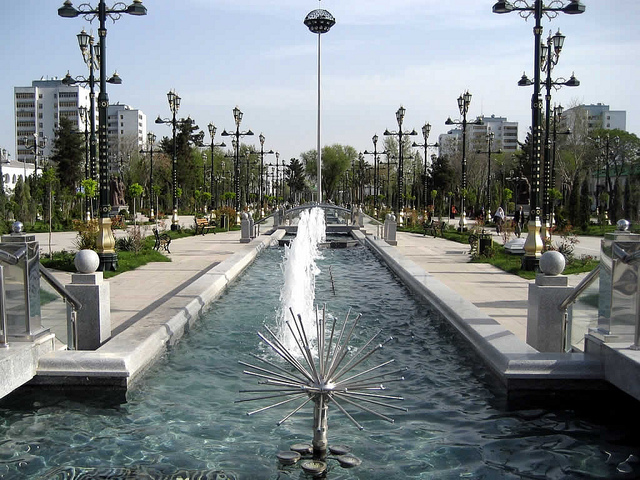 Fountains run right up the median of this boulevard in central Ashgabat. 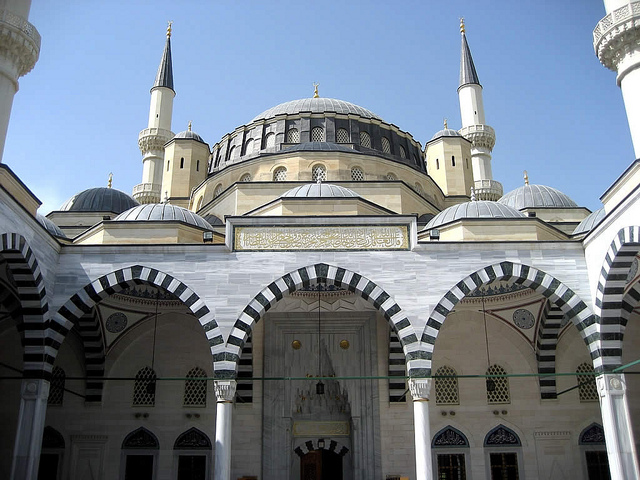 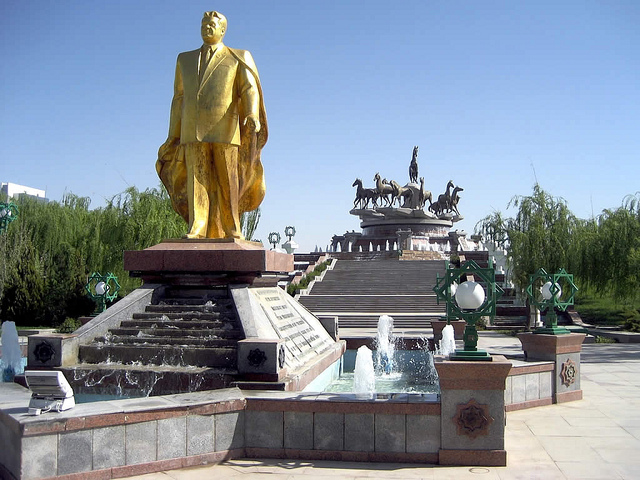 The Gates of Hell

The Darvaza Gas Craters are a surreal phenomena that is partly man-made and partly caused by humans. These craters were created during the Soviet gas exploration in the 1950s, where one has been on fire since its creation. The pit of fire, best seen by night, looks like something out of Dante’s Inferno and is the reason why many travel to Turkmenistan. 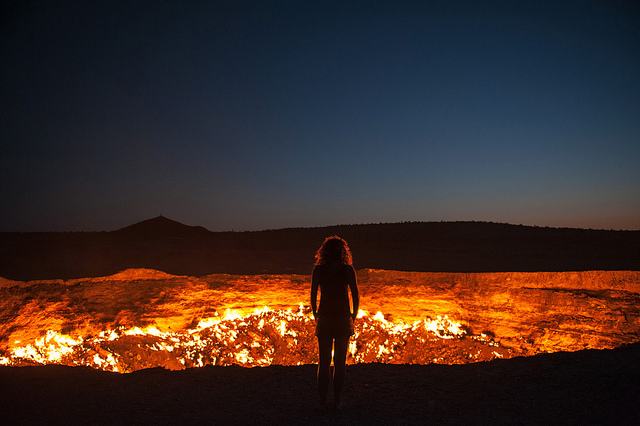 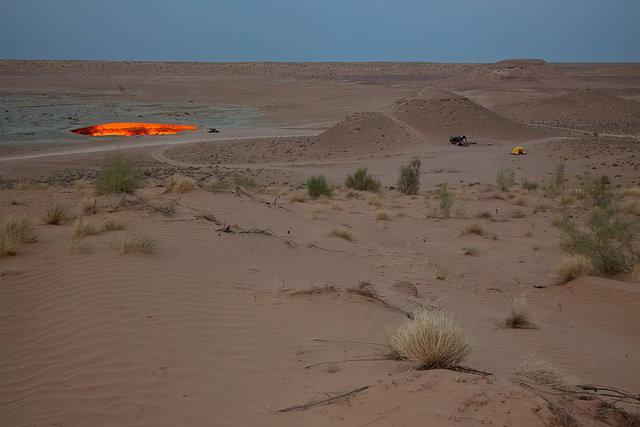 Yangykala Canyon is one of the natural highlights of Turkmenistan. The canyon is a canvas of red, yellow and pink rocks stretching out in bands across the canyon walls, but not only that, the views across the desert are also incredible and the best thing is, you do it alone. Yangykala is not only barely visited by tourists, even local Turkmen don’t come here.

All day driving through bumpy desert roads to gaze down into Yangykala Canyon, Turkmenistan’s version of the Grand Canyon. A photo posted by Pamela Sendee (@pamelasendee) on Apr 22, 2015 at 9:35pm PDT

Bathe in an Underwater Cave

Kow Ata’s underground lake may not be very big, but it will be the most unusual place you’ve ever bathed. The cave is set inside a mountain and you will climb down a series of steps before reaching the lake in the bottom. The thermal water clocks in around 35 degrees Celcius, so it’s a nice place to relax. Definitely a unique experience. 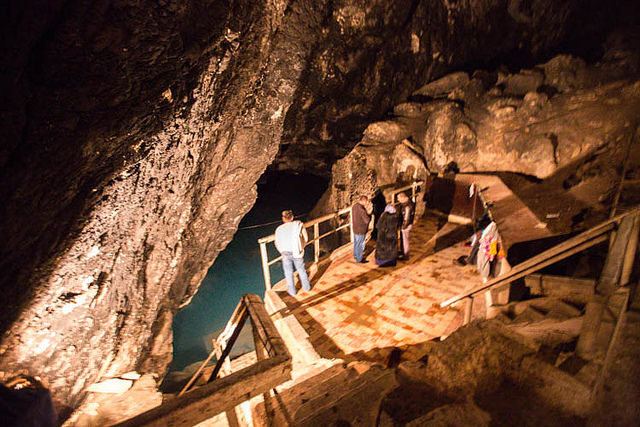 Liked this article? Looking for the latest in travel and adventure news? Then check out the rest of our articles at Adventure Herald. You can also like us on Facebook, follow us on Twitter or Instagram to keep up with our latest antics.
Tag adventure travel destinations asia central asia travel turkmenistan