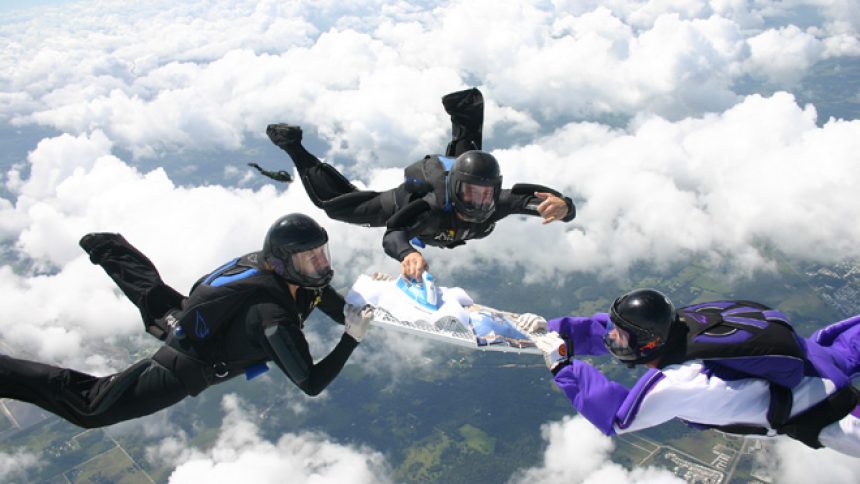 Origins of extreme ironing date back to the golden 90s. One day Leicester resident Phil Shaw comes home very exhausted and encounters a pile of cloths waiting to be ironed. A light bulb starts shining in his mind when he decides to iron his clothes in his garden. When his housemate sees him ironing in the garden, he doesn’t call the mental hospital to pick up his lunatic friend. Instead, he supports the idea and they establish the Extreme Ironing Bureau. This story took place in 1997. The popularity of extreme ironing has been increasing gradually for 18 years.

Shaw, also known as Steam, set off for an international tour to promote this activity. The turning point in the history of extreme ironing is Steam’s encounter with German tourists in New Zealand during his international tour. With the help of the German extreme ironers, a group called Extreme Ironing International was founded.

Britain’s Channel 4 aired a documentary named Extreme Ironing: Pressing for Victory. Extreme ironing had become a rock star all of a sudden. However, the real gig came later on. The popularity of extreme ironing increased immensely after it was mentioned by the National Geographic Channel.

The idea got viral and became so popular that they decided to organize the 1st Extreme Ironing World Championships in a town close to Munich, Germany in 2002. There were competitors from 10 different nations.

From then on, it became usual to see extreme ironing news on the television channels and websites of major news networks. For instance, when 128 British divers did extreme ironing under water to break the world record for the most number of divers ironing underwater, BBC was ready to help this extreme sport to climb the stairs of popularity. The Time Magazine also mentioned extreme ironers’ daredevil attempts such as doing extreme ironing on the top of Mount Rushmore and Devil’s Tower.

Extreme ironing in strange places has become a lifestyle for many people after the sport gained publicity and popularity in time. Extreme ironing enthusiasts bungee-ironed, parachute-ironed, and scuba-ironed.

Extreme ironing has taken the place of more conventional sports such as football, basketball, and volleyball to some extent. For instance, it was not uncommon to see children playing football during a road closure. However, a British man in a gown caught while extreme ironing his shirt on M1 when some part of the motorway was closed for a while due to fire on 18 April 2011.

The gist of this extreme activity is its simplicity as we mentioned already. The fact that you are not planning to embark on an extreme adventure does not mean that you cannot perform extreme ironing. Come closer and consider the unusual extreme ironing activities we suggest. It is time to get away from the tedious routine of your life.

Think about it! You can have cooler holiday photos if you do extreme ironing on the famous landmarks such as Eiffel Tower, Pisa Tower, Collosseum, and the London Eye.

Extreme ironing has definitely the potential to change your life once and for all. Now you can imagine having ironed shirts while performing your extreme activities. Awesome, isn’t it?