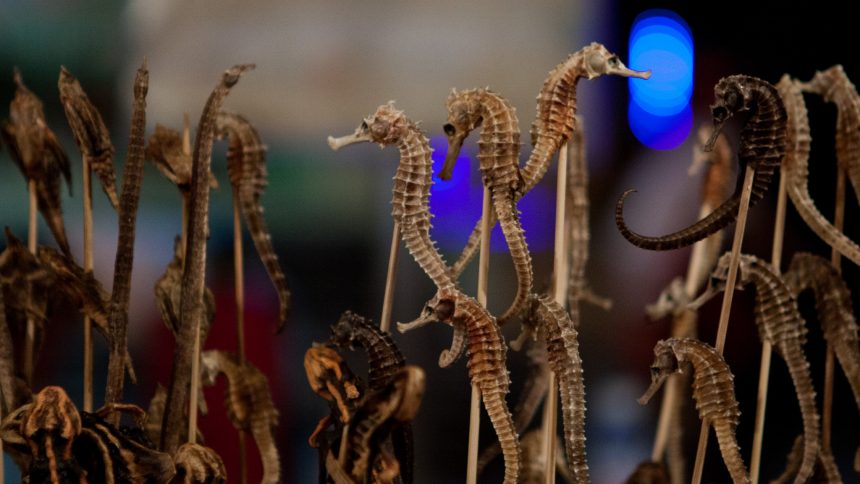 9 of the World’s Weirdest Foods

Adventurous travel is about more than just how many extreme sports you try, ticking off the famous sites, and whether you “head off-the-beaten-path” to a non-touristy bar. Adventurous travel should also be about experiencing some of the real local culture, including both the bizarre and the brilliant parts. Of course, one of the most important parts of the local atmosphere is usually the food! Now we’re not saying you have to try the world’s weirdest foods to be a real adventurous traveller, but if you’re looking for your next extreme adventure, well we think we’ve found just the thing. Here are nine of the world’s weirdest foods, they’re not for the faint hearted. 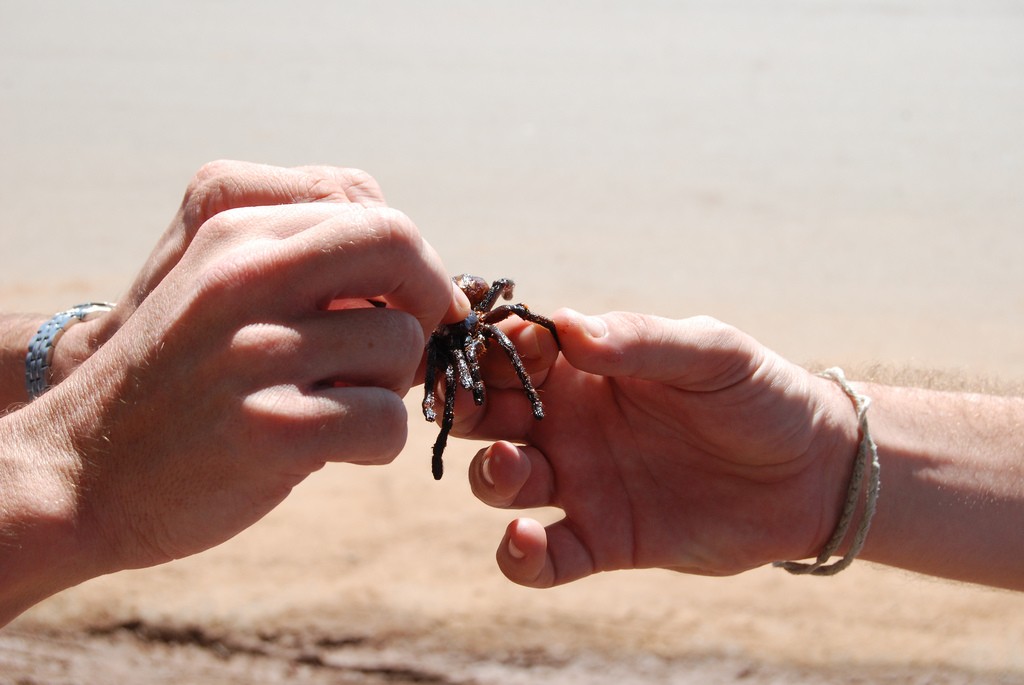 All right, let’s start with something easy. Wedged in between seeing Phnom Penh and Angkor Wat, many tourists stop by the market town of Skuon to try this fried regional specialty: the fried tarantula. These deep-fried babies, are presented in a big mound of brown hairy legs with plenty oil floating at the bottom of the tub. Pick one (or more) off the heap and pop it in your mouth. Your reporter can attest that it tastes like really oily crisps or chips. Try a leg only if you’re squeamish, but for the brave pop the whole body in your mouth too! Yum! 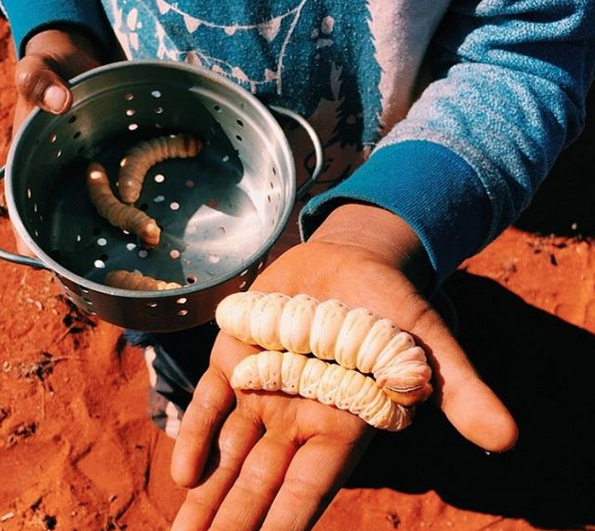 Most people associate Australia with that other weird food: Vegemite, but here we’re gonna let you know about one of the weirdest types of Bush Tucker aka Bush Food. Bush Tucker is the natural food found in the wild, traditionally eaten by Indigenous Australians. Witchetty Grubs are regularly on the Bush Tucker menu, and these long white “slugs” are actually wood-eating larvae. In the past it’s been a regular part of the diet of Indigenous Australians because it’s high in protein, and some still eat them today. The best way to eat them is raw, just hold onto the head and bite of the rest. No mucking around.

Central and Eastern Europe has quite a few weird foods to speak of, from tripe and blood sausage to pork jelly and chicken feet soup, but one of the weirdest has to be chicken or rooster testicle stew. Usually this dish is made in winter, and on a visit to local Christmas markets you will see a pot of testicle stew right next to the mulled wine stand. The stew has a paprika and onion sauce, and it’s actually quite tasty – if you can get past the thought of exactly what you’re eating that is. 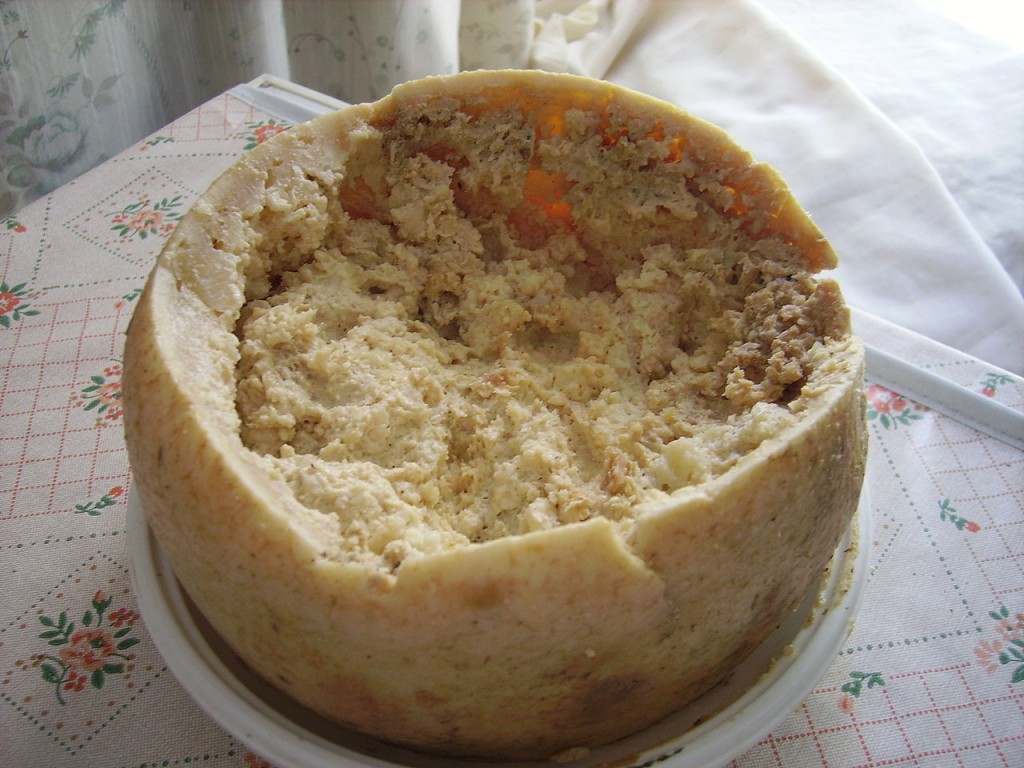 Ah, Italy. The land that’s given us the delicious culinary delights of pizza, pasta and tiramisu. Well, we don’t want to break the boot-shaped country’s stronghold on the world’s yummiest food title, but… Well, they have this food called Casu Marzu, which is essentially rotten cheese. It’s infamous because you know it’s ready to eat when there are maggots in it. Far from being ‘off’ these larvae are specifically added to the cheese as it goes from the fermentation stage into decomposition. Some people take the larvae out before eating, others don’t. 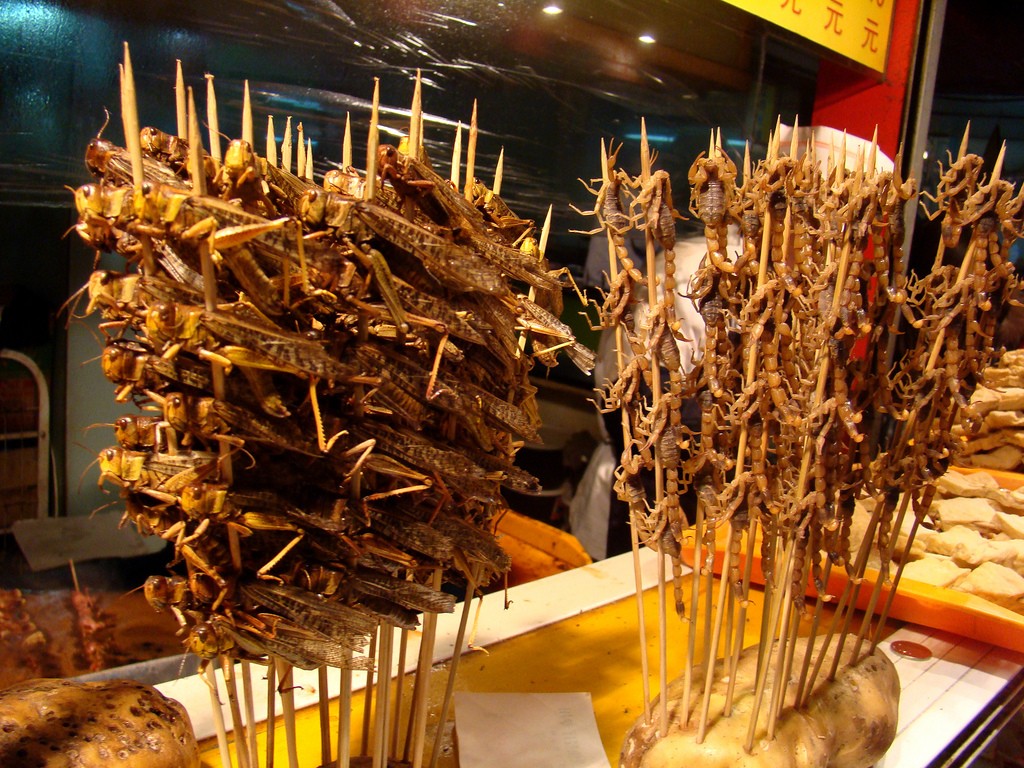 As you can see in the cover image of this article, there are all kinds of creatures that are skewered and eaten in China (the cover image does in fact show seahorses). Yet, we have to say one step weirder than seahorses has to be the skewered scorpions. Most would run a mile from a scorpion and its stingy tail, but in some parts of China they’re a typical street food. Like the hairy spiders mentioned above, the scorpions are cooked in oil and they have a salty flavor and crunchy texture. 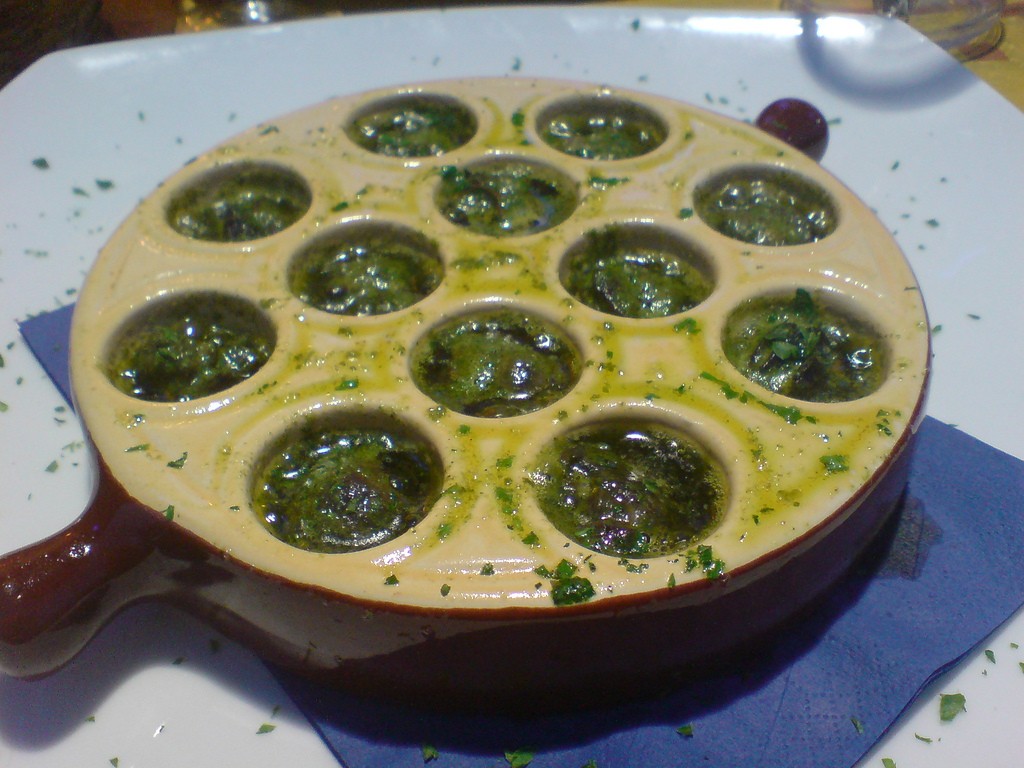 We have to include something fabulously posh on this list. So, when in France, why not try l’escargot. There are even whole restaurants in Paris dedicated to the slimy shell creatures. They come either in their shells, or de-shelled served on special plates (as in the image above). The snails are often offered with different flavors like garlic and parsley butter, and they’re actually quite delicious. Why not try snails as a starter and frog legs as a main? Like most things in France, snails are not cheap, and they’re considered somewhat of a delicacy. 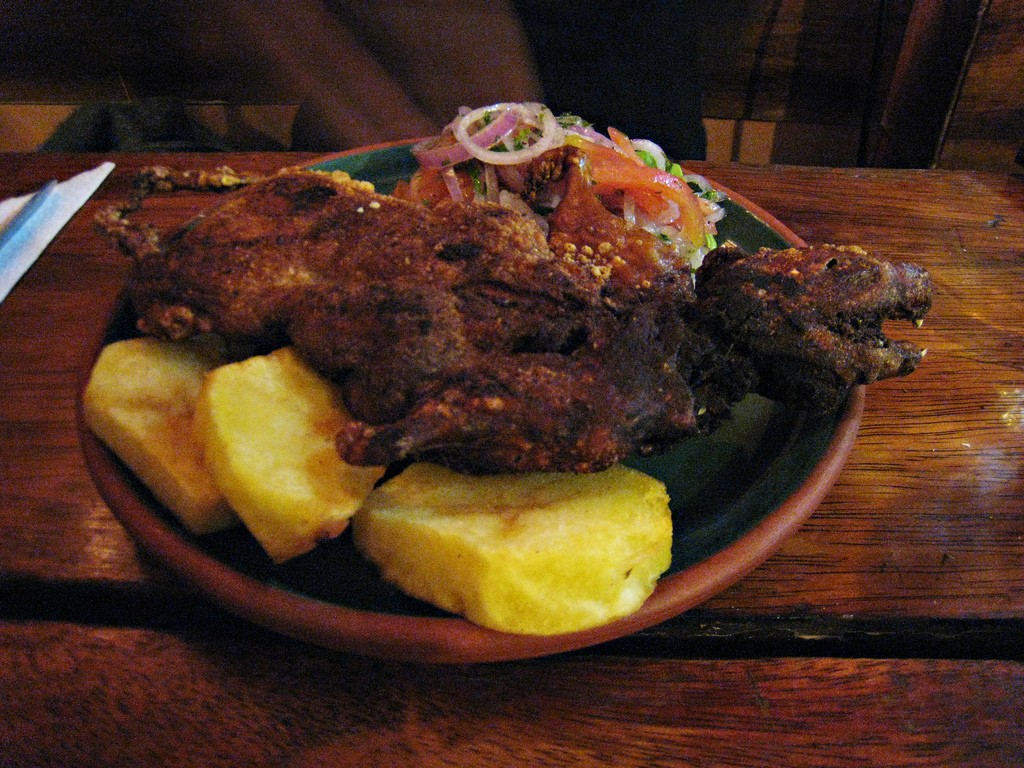 Known locally as “cuy,” fried roast guinea pig is a Peruvian delicacy. While for many in the West guinea pigs are more likely to be found in the pet shop than on a plate, they’ve been consumed for thousands of years in this South American nation. As you can see in the image above, they’re often cooked whole with just salt and garlic added so the skin is nice and crispy. Eat with your hands! 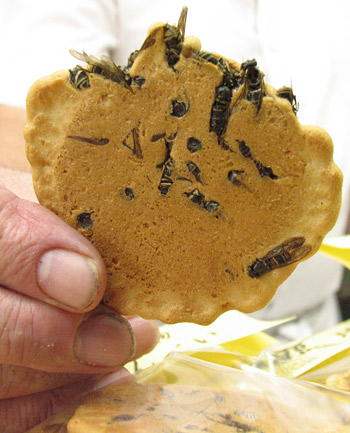 Maybe not everywhere in Japan, but there are some spots where wasp crackers are the real deal. Kind of like a rice cracker, with added yumminess. These senbei crackers have a sweet and savory flavor. Not heading to Japan any time soon? Apparently you can even order them on Amazon depending on where you live. Might take up that offer! 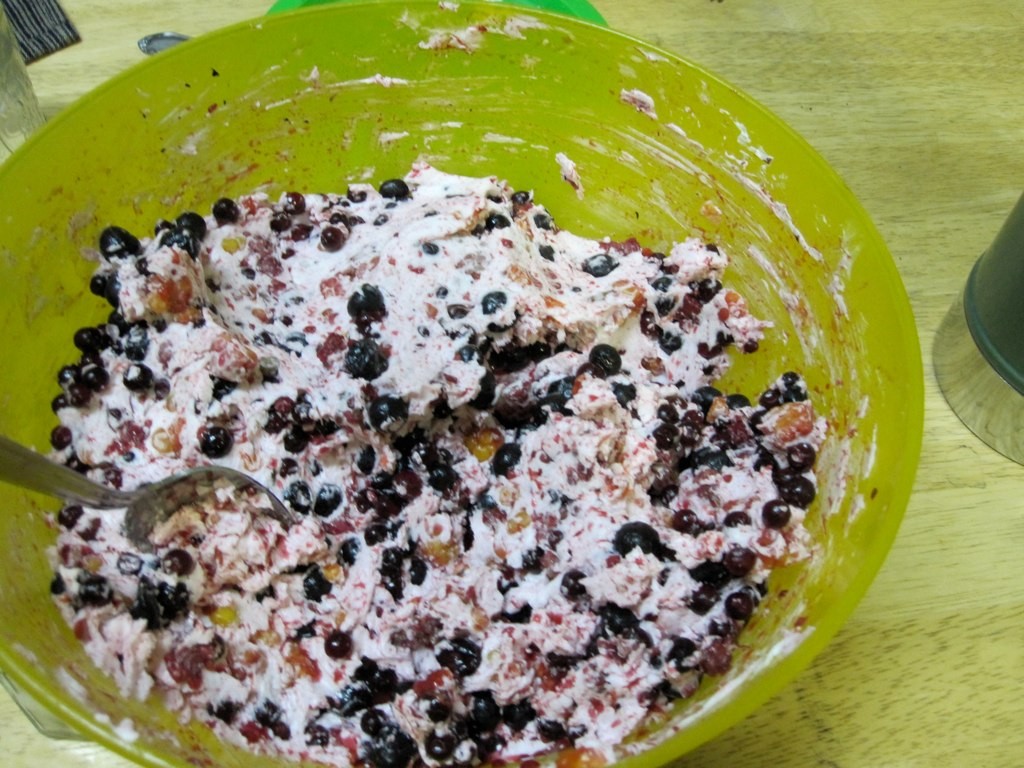 Fancy some dessert? Eskimo Ice Cream – or akutaq locally – sounds like it could be the perfect thing. It’s traditionally eaten by the Indigenous people of Alaska, but it’s not what it seems! It’s made of reindeer fat or tallow, seal oil, fresh berries and sometimes ground fish. It can also have moose tallow or walrus tallow included. Nowadays raisins and sugar can also be added to the mix. This one actually sounds pretty delicious! Bon appetite!