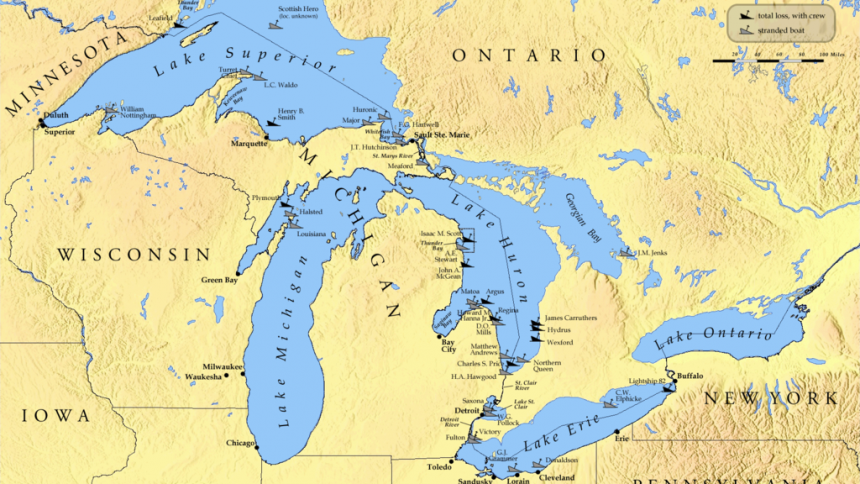 Traci Lynn Martin is setting a kayaking record on a surf ski in an attempt to circumnavigate all five Great Lakes in a calendar year.

Martin has been paddling since March and hopes to complete her grueling journey in March 2018.

Already, on October 15th, 2017 Martin became the first person on record to circumnavigate the three largest lakes in North America: Lakes Michigan, Superior and Huron, in one calendar year.

In this year, the registered nurse has paddled up to nearly 60 km a day, sometime for up to 10 hours. The current Guinness World Record for most miles paddled in a surf ski in one calendar year belongs to Gerhard Moolman, who journeyed 6,152 km in 2002. Traci Lynn Martin sets a kayaking record if she covers at least 6276km before December 31.

Martin began planning her journey shortly after her mother passed away from pancreatic cancer in 2015.

“She told me, if there was anything I wanted to do in life to go and do it, don’t put it off,” recalls Martin, who herself is a mother of three and has recently become a grandmother.

“It can start out very calm, and then, within 15 minutes, you’re dealing with 5-foot waves out there,” said Martin. On Oct. 27, a record-breaking 29-foot wave was recorded on Lake Superior.

Kayakers on the lakes in winter risk hypothermia in the face of inclement weather and Martin had to be rescued in an icy March of this year, shortly after setting out on the challenge, by the Huron County Sheriff’s Department.

With her GPA tracker malfunctioning, Martin decided to rely on her boat’s compass. Ten hours later, she realized she was paddling in circles in dangerous conditions. The incident made her more aware of the threat of bad weather and warned her to be more cautious when necessary.

“I wish I could go back and change how that happened. I would not have gone out that day.”

Martin has been doing all of this in spite of a painful rheumatoid arthritis condition, which she was diagnosed with in 2011. She suffers from frequent “flares” or bouts of joint inflammation and has not been able to raise her elbows since July. This means she will likely not return to endurance racing following the completion of this expedition.

Martin has described the joints in her left hand as “destroyed” and says her right hand is going the same way. She likens the pain of the condition to someone beating your body with a baseball bat but chooses to surf ski her way to record-setting success regardless.

“Never give up and never stop trying”

Martin says she aims to be an inspiration to other rheumatoid arthritis sufferers and even more so for her youngest children.

“I hope that what they get out of this is, no matter what obstacles you face, to never give up and to never stop trying,” she said. “I’m trying to show them that by doing that. I’m trying to lead by example.”

Check out www.justaroundthepointe.com to follow and support Martin’s journey.