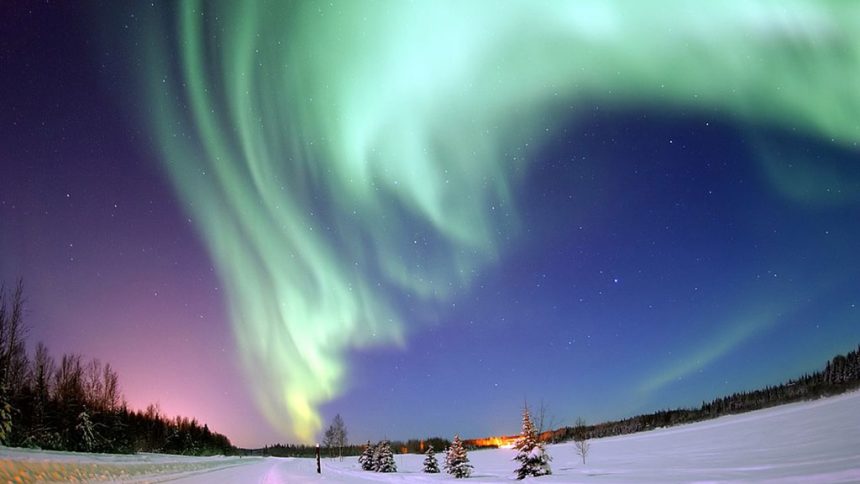 Every now and then, Mother Nature treats us to a spectacular show that makes you stop and appreciate just how mysteriously beautiful our planet is. Light comes in many changing forms, some of which can be truly mezmerizing. These natural light displays make fireworks seem boring and you should really try to see at least one of them before you die. Find out which adventure travel destinations to visit to witness one of these awe-spell-binding sights. 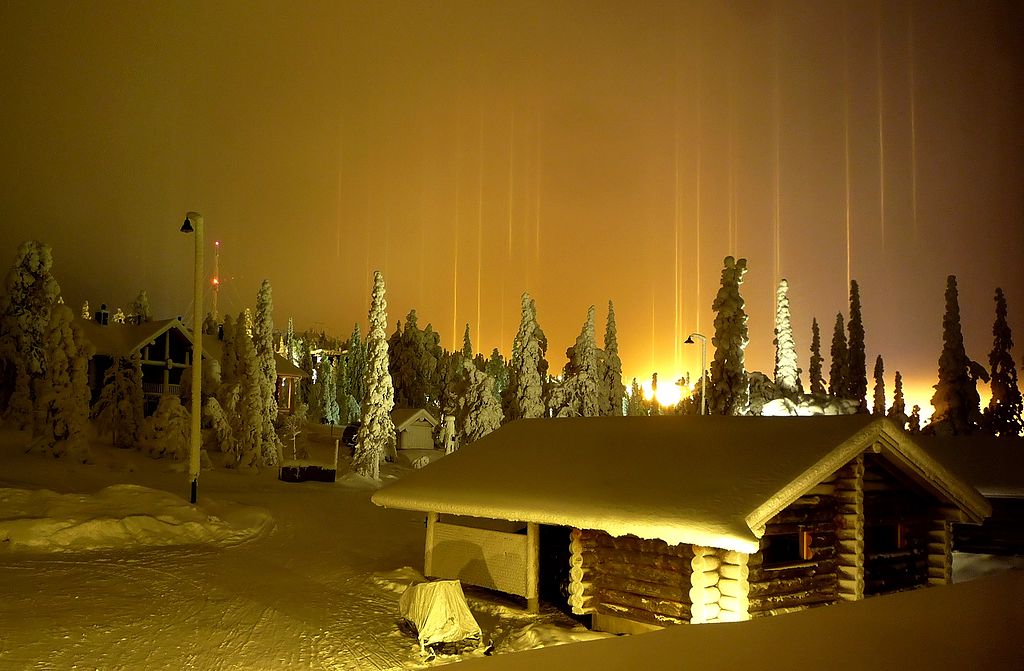 A light pillar is a rare phenomenon that many have compared to something out of Star Trek or Close Encounters of the Third Kind. In very cold places, and usually towns and villages, typically polar regions, they have also been spotted in Idaho, USA and in January 2017 paid a visit to Ontario, Canada. science has a pretty nifty explanation for this optical phenomenon, which is in fact created, not by aliens, but by the reflection of light from many tiny fluttering ice crystals forming near the ground, a form of precipitation is also known as crystal fog. The pillar or stripe effect is caused by these crystals acting as a mirror, reflecting light back towards the ground.

The Glowworms of Waitomo Caves 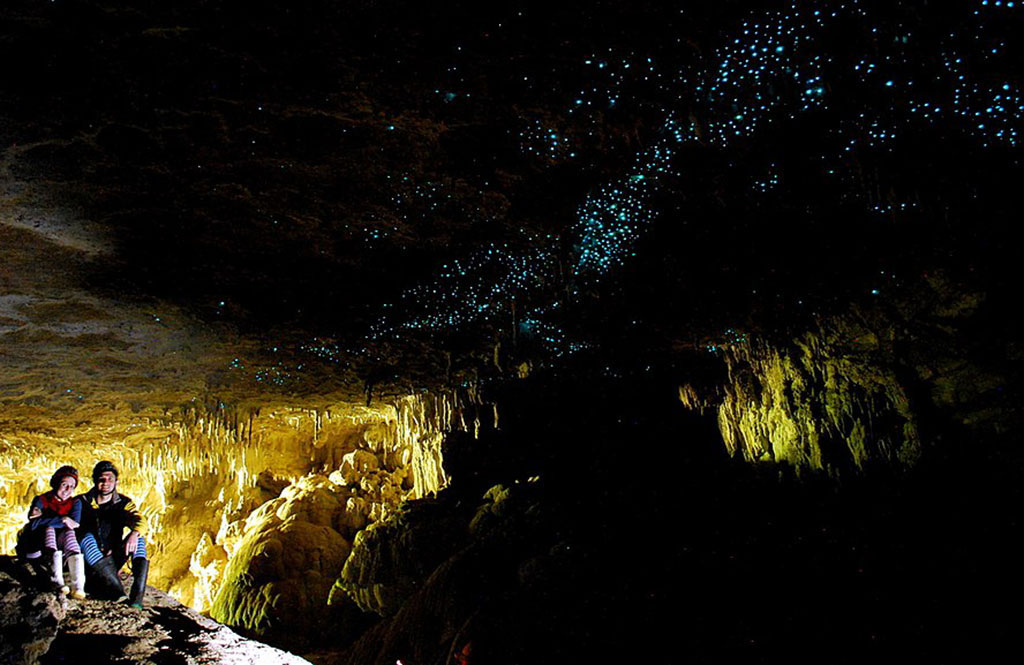 The magical Waitomo Caves have attracted visitors for more than a century, home to both magnificent limestone formations and glowing bioluminesent glow worms.‘Wai’ is the Māori word for ‘water’, while ‘tomo’ means a hole in the ground. The glowworms are actually the larvae of the an endemic species of gnat and grow to roughly the size of a matchstick. Their tails produce chemicals that react with oxygen in the air and this generates light. The caves serve as a perfect environment for the little critters because of the dark, damp and sheltered from the outside wind. The Waitomo Caves can be visited by boat as part of a guided tour. For an action packed visit with extreme sports on the agenda, you can do blackwater rafting or a caving tour which can include activities such as climbing, tubing and abseiling. 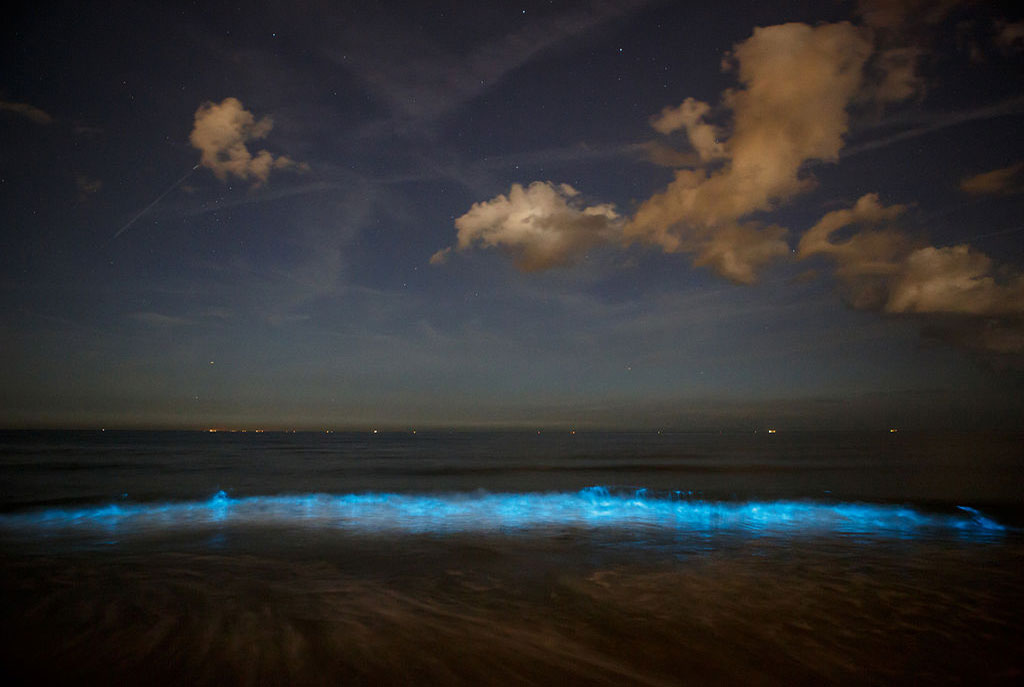 Another example of bioluminescent natural light displays, phytoplankton in some regions appear as thousands of tiny dots of blue lights illuminating the shorelines at night. The pytoplankton glow blue as a defense mechanism when they are disturbed or agitated. Places where this can be seen include the Maldives, Jamaica’s Luminous Lagoon and Puerto Rico’s Bioluminescent Bays in Fajardo and Vieques. Unfortunately, the glow has become dimmer in recent years with chemicals in sunblock and bug spray possibly having their part to play, so be mindful of this if visiting one of these areas.

The most well known of all the natural light displays in the world, witnessing the auroras is an unforgettable experience where iridescent light dances across the sky in a spectrum of red, green, yellow, pink and blue. The northern lights and southern lights are two of the best-known light displays. Most people think of Scandinavia when they think of viewing Northern Lights, but there are also a lot of locations in North America where great views can be had, namely the forests in Fairbanks, Alaska and the National Parks of Alberta are just some examples. 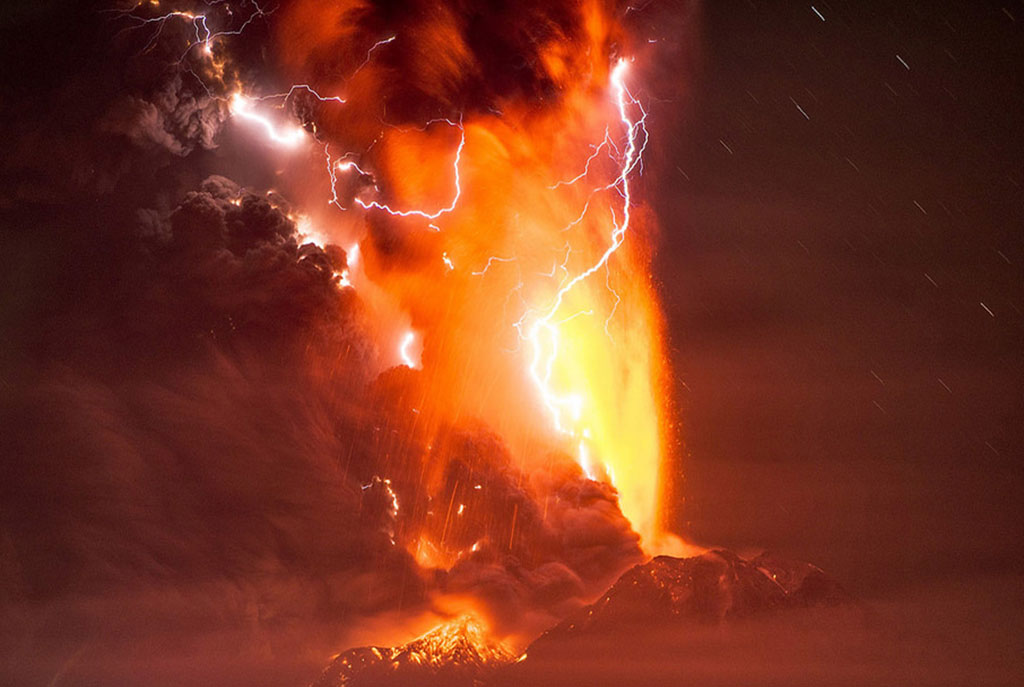 Probably one of the most hardcore natural light displays on this list, volcanic lightning, also known as a ‘dirty thunderstorm’ strongly brings to mind some special effects you might have seen in a Hollywood disaster movie. A marriage of two of Earth’s most dramatic phenomena, its exact cause has long been a mystery. That is, until 2016, when scientists studying high-speed footage of the electrified outbursts at Mount Sakurajima found that ash particles and ice are responsible.  It’s hoped that scientists could eventually start using volcanic lightning to predict the size of ensuing ash clouds and then be able to issue warnings further in advance.