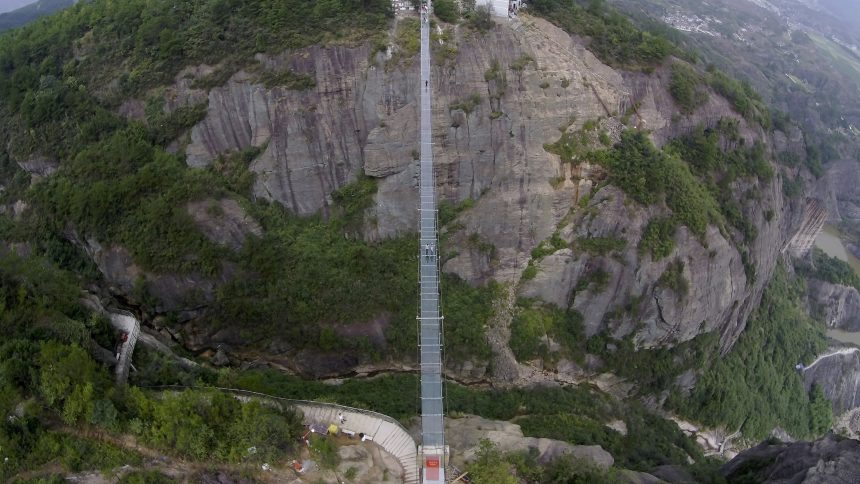 There have been two freaky incidents on suspension bridges this month; one in New Zealand, the other in China.

Firstly, the Hopuruahine Bridge in New Zealand collapsed with walkers still on the bridge; this video captures the exact moment a couple of hikers plummeted eight meters into the water below.

The bridge, shown in the video above, is meant to be able to carry 10 people, but there were only four people on the bridge at the time, albeit they were reportedly carrying heavy backpacks. Luckily, none of the hikers suffered serious injuries, and we’re lucky that one of the trekkers, Adrien Whistle, was able to capture the frightening scene on camera. Adrien Whistle and his friends were trekking through Te Urewera National Park on New Zealand’s North Island, in September, when the accident occurred. We must admit, his camera is also pretty cool to have survived being immersed in water, and live to tell the tale!

Secondly, the Yuntaishan glass bridge in central China’s Shiniuizhai National Geological Park hit the headlines in late September when it opened because it’s made largely of glass. But it’s now back in the news for all the wrong reasons. Aptly named the “Brave Man’s Bridge” in English, the glass has started cracking in parts.

People at the scene reported hearing a big crack, followed – obviously – by everyone scrambling to get off the 300-meter-long bridge, that’s 180 meters above the valley floor. Local media reports the incident occurred after someone dropped a thermos onto one of the glass panels.

Officials had said the glass bridge was supremely safe given it is made of glass that’s about 25 times stronger than normal glass and because the glass is held in a steel frame. They also said the glass is extra resistant to sagging and shattering. Perhaps it is; but it seems the engineers hadn’t tried the dropped-thermos-test!

Officials now say there is no danger to tourists who still wish to cross the glass bridge because only the first layer of glass cracked. Who dares wins!

Liked this article? Looking for the latest in travel and adventure news? Then check out the rest of our articles at Adventure Herald. You can also like us on Facebook, follow us on Twitter or Instagram to keep up with our latest antics.
Tag adventure travel news asia bridge collapse bridge collapse caught on camera bridge collapses china glass bridge Hopuruahine Bridge Hopuruahine Bridge Collapse New Zealand suspension bridges travel news Yuntaishan Glass Bridge Yuntaishan Glass Bridge Cracks