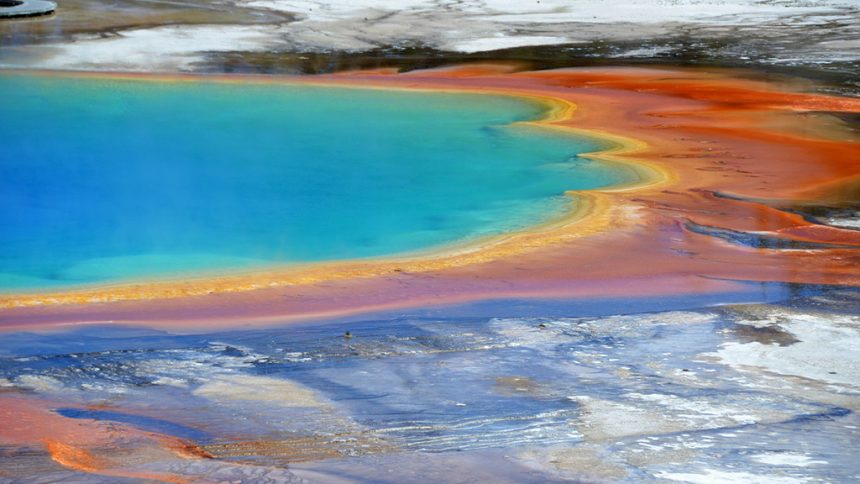 5 of the Most Colorful Wonders of the Natural World

Some places on this planet were given extra attention when pigmented by nature’s paintbrush. Certain scenes possess a beauty in brilliant color that rivals the most exquisite painting you can find made by the most gifted artists. Luckily for us, some of these works of art that grace the surface of the Earth also happen to be located in some of the best adventure travel destinations in the world.  On the other hand, reaching others would mean difficult travel in extreme climates. Thanks to natural occurrences on our planet giving rise to truly awe-inspiring environments and spectacular sights, here are some of the most colorful wonders of the natural world. Western Australia is actually home to quite a few extraordinary pink lakes. Lake Hillier is one of the most famous examples because while other pink lakes change their colour depending on seasons and weather conditions, it remains pink all year round. This flamboyantly hued water formation is surrounded by eucalyptus and paperback trees and located on Middle Island, off the West Coast.

The bubblegum pink color is due to a combination of high salt levels, high temperatures and low levels of rainfall affecting the algae living in the water. The algae grow in the salt crust at the bed of the lake and produce beta caroetine, a red pigment as part of its photsynthesis. Few tourists manage to reach it but those who are dropped off by helicopters and cruise ships attest that the water is still very pink when viewed in person and the high salt levels will make you float like a cork.

Not only one of the most spectacular natural wonders in Colombia, but also one of the most colorful wonders of the natural world, Caño Cristales is also known as the River of Five Colors. Various parts of the natural formation provide the variety of colours. The red color is created by a red plant growing on the riverbed, while block rocks, green algae, yellow sand and blue water paint the other hues of this liquid rainbow. Visitors can also enjoy exploring waterfalls, pools and caverns along the river. Not only that, the water is pleasant to bathe in and has no aquatic creatures present. The river is colorful from July through to November. Getting here is quite a challenge as you will need to get a plane or bus from Bogota to Villavicencio and then a plane to La Macarena. It is recommended to hire a guide here to lead you to the river. For a visual experience that parallels what traveling to Mars must feel like, look no further than The National Park of Bryce Canyon. This natural attraction is famous for its layers of red, orange and white rock deposits. The best place for a spectacular view of the colourful rock is Sunset Point, also known as the Claron Formation. Formed approximately 50 million years ago in a large freshwater lake, iron oxide minerals provide streaks or red, orange, yellow and even patches of pink and purple as a result of manganese oxides. For the best photo opportunity, the canyon provides, get your camera out at the break of dawn. The entire park faces East and the canyon and sky both turn red during the brief moments of sunrise. For one of the best driving adventures you can do in the states, the Wild West Challenge takes you to Bryce Canyon along with a number of other must-see destinations across the western part of the country. 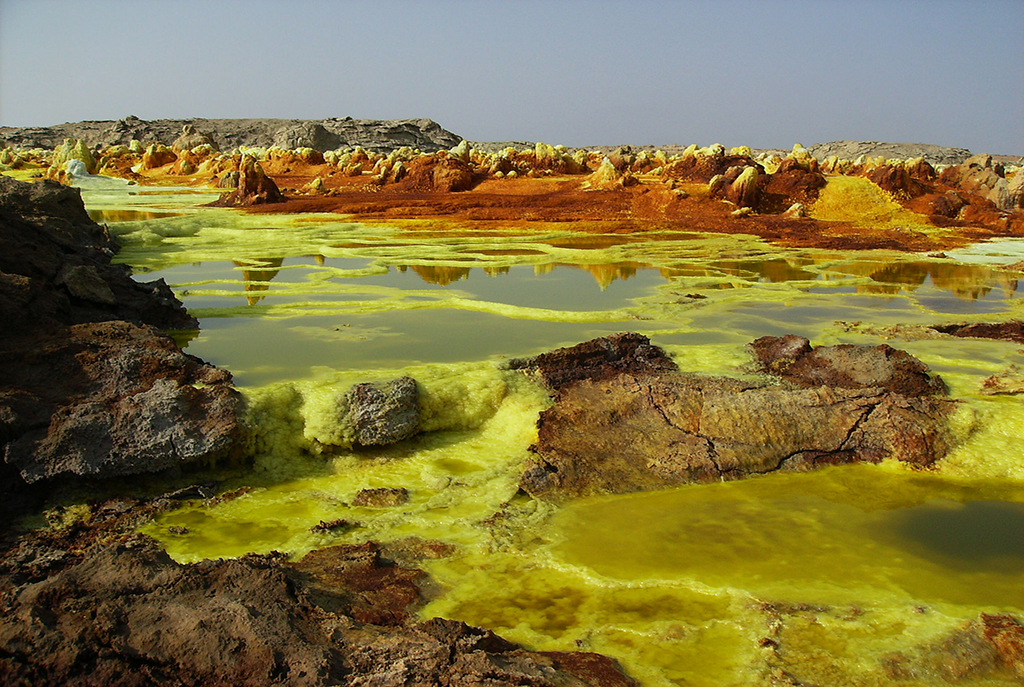 The Danakil Depression in Northern Ethiopia has the honor of being not only one of the most colorful natural formations on our list but also one of the world’s hottest places. This incredible place is sometimes called “the gateway to Hell’ and the “cruelest place on Earth”, as it is one of the most acidic and desolate ecosystem’s you’ll find on this planet, where life isn’t exactly welcome. One of the lowest-lying places on the planet at 100m below sea level, it is without rain for most of the year. It was formed as a result of the movement of three tectonic plates in the Horn of Africa. As a result of the intense heat and lack of rainwater, sulphur and salt deposits have formed, creating the vibrant, almost fluorescent yellow and green colors.  Visiting the depression is reserved for the most extreme adventurers due to the stultifying heat which is made even worse by what locals refer to as the “Afar wind”, a phenomenon in which the hot breeze creates the sensation that your skin is being burned. Yikes. You can travel here as part of a 4×4 extreme adventure or on camelback (expect basic accommodation). Also be aware that the region is very dangerous because of salt-mining related conflict. Tourists are strongly advised to visit the depression only in the company of personal armed guards which can make it prohibitively expensive to visit. 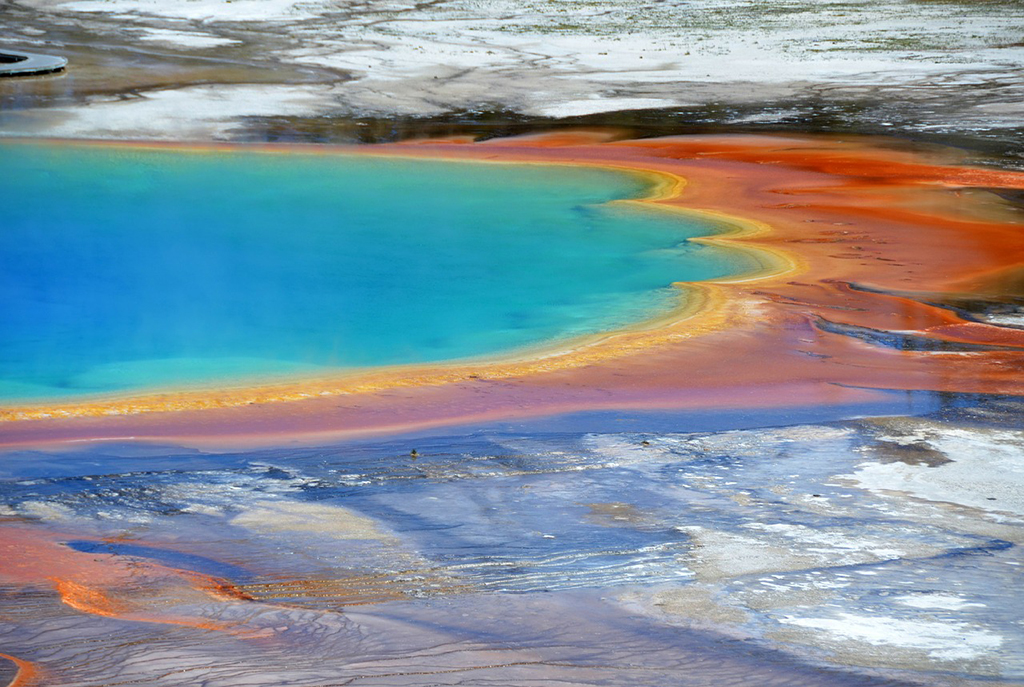 The iconic hot springs of Yellowstone, most notably Grand Prismatic Spring, feature concentric circles of vivid colors thanks to the heat-loving microbes who dwell within. You could be forgiven for thinking images of this natural feature to be Photoshopped, but there is, in fact, a very scientific reason behind the vibrant colors. The dazzlingly bright hues of fire colors, as well as greens and blues, are caused individually by different groups of bacteria, each adapted to the conditions including temperature and pH of their environments. You can’t swim here though, as the water is about as acidic as a car battery and hot enough to blister skin. Outstripping Old Faithful, the geyser that predictably erupts every 91 minutes, Grand Prismatic Spring is now the most photographed thermal feature in Yellowstone. The spring got its name from the Hayden Expedition in 1871, the first federally-funded exploration of what later became Yellowstone and the leader of the expedition wrote:

“Nothing ever conceived by human art could equal the peculiar vividness and delicacy of color of these remarkable prismatic springs. Life becomes a privilege and a blessing after one has seen and thoroughly felt these incomparable types of nature’s cunning skill.”

We have to agree!