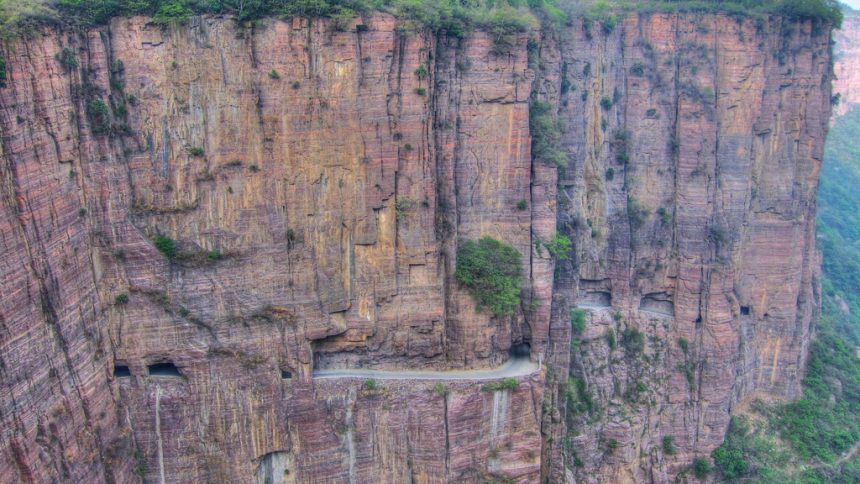 The 5 Most Dangerous Roads In The World

You are not happy with the street maintenance in your hometown, that big pothole in front of your house is bothering you already for weeks and the traffic jam on the way to work is driving you crazy? Rest assured, the following most dangerous roads in the world will make you appreciate every single construction site and stop sign! 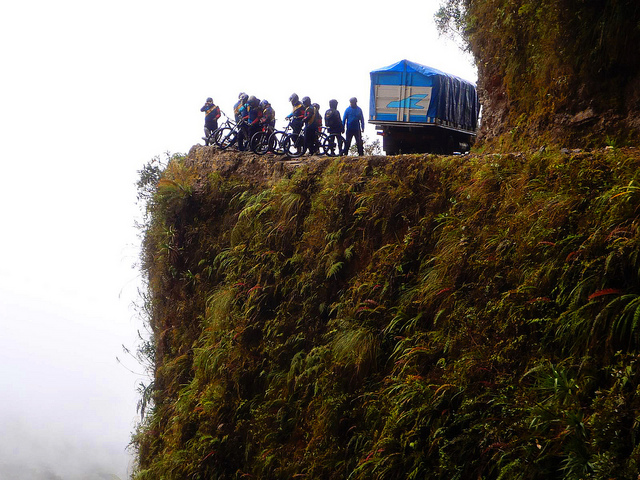 “Road of Fate” and “Death Road” are just two of the many nicknames of Yungas Road. Being one of the few roads that connect the amazon rainforest region of northern Bolivia with the capital La Paz, it leads 69 km through the mountains, rising up to 4650 m at la Cumbre pass.

The road is only 3.2 m broad, it has no guard rails, and with steep cliffs are towering up on one side and dropping up to 600 m on the other side, it’s quite the motoring adventure.

Sudden turns, rock fall and dust from vehicles in summer as well as fog and waterfalls in winter, that turn the street into a slippery, muddy path, do their best to let it live up to its reputation as the most dangerous road in the world.

Of course all the dangers can’t keep some adrenalin junkies from traveling Yungas Road, which is especially popular for mountain biking. Each year 200 to 300 travelers die, countless crosses at the side of the street reminding of them. 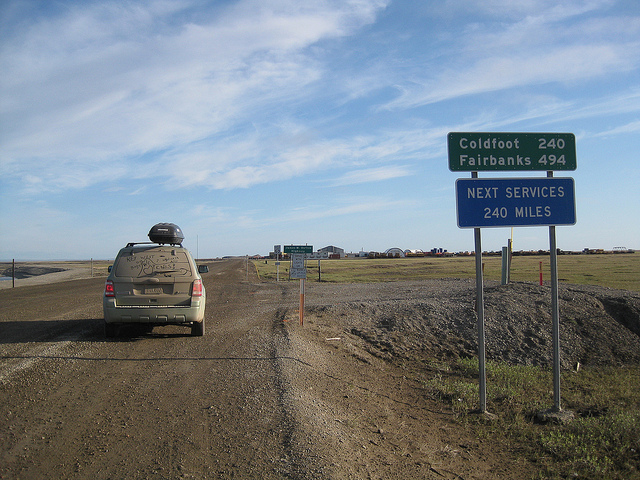 James W. Dalton Highway, a gravel gravel street in Alaska, seems to be quite harmless at the first glance. Leading over 666 km from Fairbanks through the middle of nowhere to Deadhorse near the Arctic Ocean and to the Prudhoe Bay oil field, it is an important supply road for the Trans-Alaska Pipeline System.

But don’t be deceived by the spectacular Arctic landscape. With only 3 villages over the whole distance, 3 places where fuel is available and no medical facilities available in between, Dalton Highway is one of the most isolated roads in the USA.

Mostly used by trucks, the road is in a bad condition with huge potholes, several steep gradients and clouds of dust, mud and gravel hurled into the air. This reduced visibility can be especially dangerous for small vehicles like motorbikes. The extreme Arctic weather also doesn’t contribute to a secure driving experience. To ensure safety, the headlights of the vehicles have to be turned on all the time and all cars should bring survival gear with them. 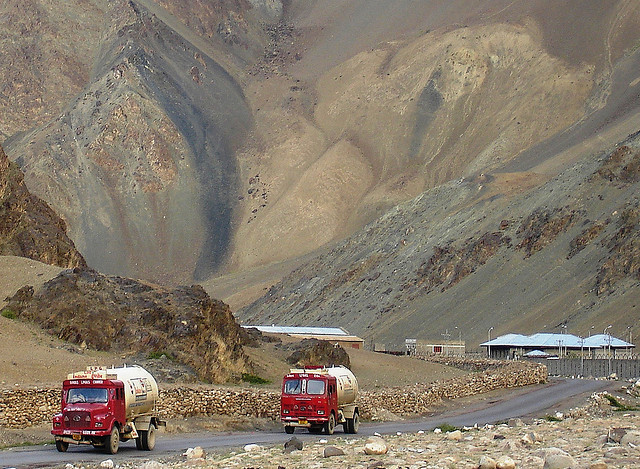 It is not possible to name just one. Most of the streets leading through the highest peaks of the world are narrow gravel roads, carved into the stone or nestled into the side of a mountain, with steep cliffs and sudden, slippery turns. Floods, landslides and the occasional crashed car on the side of the road or at the bottom of the cliffs complete the picture.

An adventure like this draws of course countless thrill-seekers into the mountains. Not all of them arrive at their final destination, but those who do, are stunned by the views over the snow covered peaks of the roof of the world.

If you consider such an extreme adventure, it is important that you are already used to the thin air and can completely focus on driving. Also bear in mind, that there are few villages on the way and hardly any medical assistance is available along the roads, which can make little accidents life threatening. 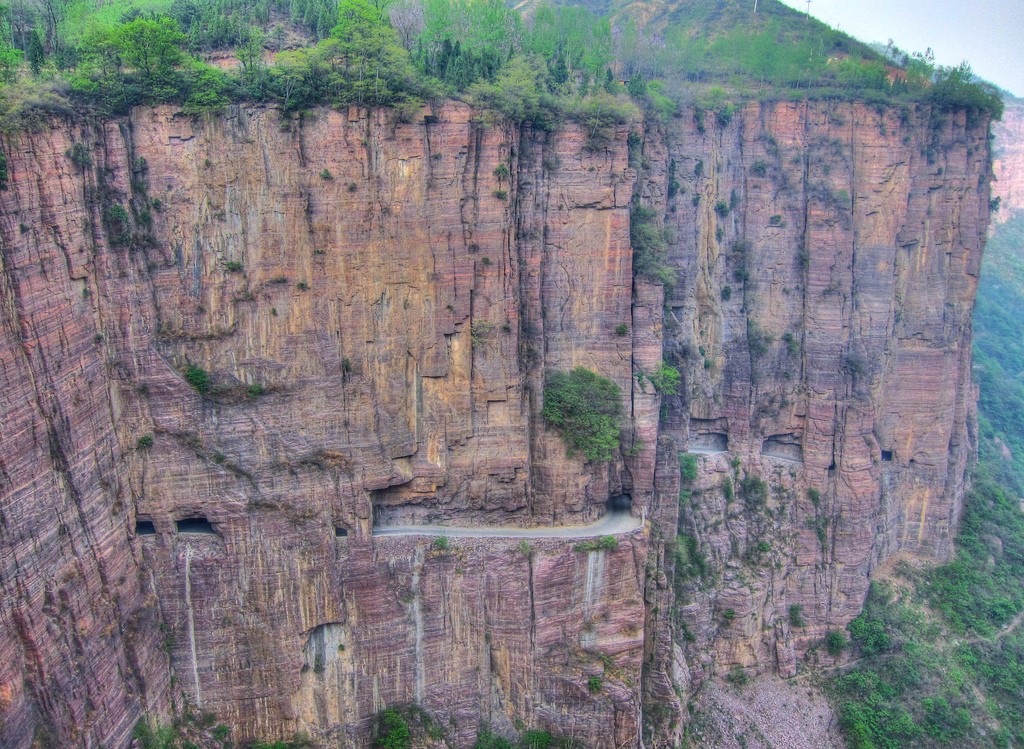 Armed only with chisel and hammers, 13 villagers decided to end the isolation of their village Guoliang high in the mountains, whose only connection to the outside world were 720 slippery, almost vertical steps hewn into the rock. They started carving a 1200 m long tunnel through the Taihang Mountains in 1972. One villager died during the construction, but that didn’t stop them and after 5 years they finally completed it.

The tunnel is 5 m high and about 4 m wide, wide enough for cars. Since the tunnel was built with the principle of the least resistance, it turns and dips unexpectedly and several blind spots are every driver’s nightmare.

Today the tunnel is a major tourist attraction and brings much needed revenue for the villagers. 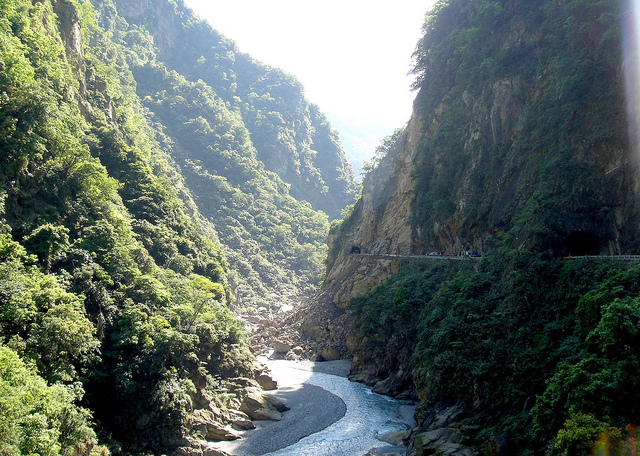 While the road is an engineering masterpiece, it is also the devil in disguise. The great view can easily distract you from the blind curves and sudden turns of the narrow street. Great parts of the street were hewn directly out of the rock, the Lee Woo Ho River on the bottom of the gorge to your other side.

Liked this article? Looking for the latest in travel and adventure news? Then check out the rest of our articles at Adventure Herald. You can also like us on Facebook, follow us on Twitter or Instagram to keep up with our latest antics.
Tag asia bolivia china death road himalayas motoring adventures south america taiwan terrible roads USA