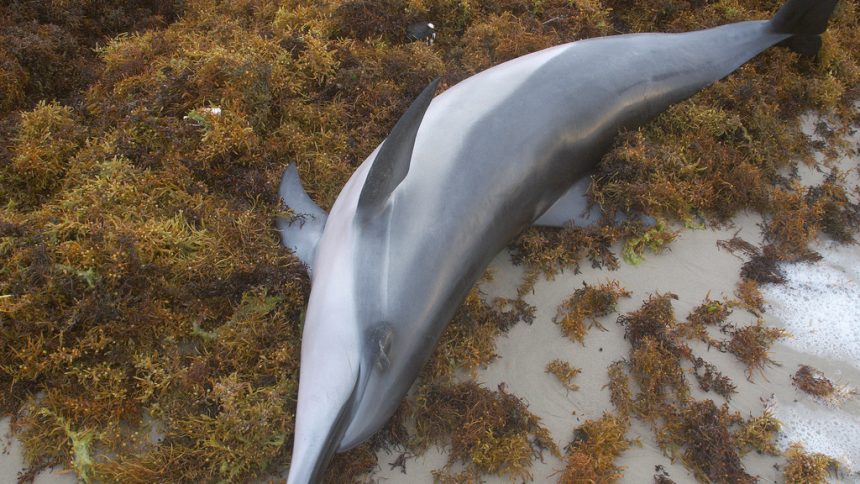 Seaweed Plague In The Caribbean

The pristine beaches of the Caribbean are facing a serious threat: Sargassum, a brown macroalgae is piling up on the shores.

Sargassum is a regular guest along the Caribbean beaches, but over the last years the extent and the frequency of the algae blooms have exploded. By now, local authorities are speaking about a natural disaster. Mexico goes so far to employ 4600 temporary workers, to help gaining control over the plague.

The algae does not only ruin the Caribbean postcard idyll visually, the rotting seaweed also oozes the smell of foul eggs and attracts sand fleas. Even though usually a useful habitat for many marine organisms while floating in the Sargasso Sea, huge amounts of Sargassum along the coastlines can even lead to the mass death of fish and of baby turtles on their way from the beach into the ocean. In the worst case, Sargassum can create an oxygen free zone, where marine life is impossible.

Several factors have been blamed for the explosion of the algae bloom. Increasing ocean temperatures and changing currents are one possible trigger for the plague. But also higher nutrient levels in the ocean through the influx of fertilizers and sewage waste are a possible guilty party.

In some areas, the algae bloom has reached an extent, that tourists even cancel their holidays because of the seaweed plague in the Caribbean. With the Caribbean main season being from December till April, there is still some time to clean up the beaches. But for the huge amount of algae, heavy machinery is needed, which can further damage the beaches. There are plans to collect the seaweed before it reaches the coast, but methods first have to be tested.

Liked this article? Looking for the latest in travel and adventure news? Then check out the rest of our articles at Adventure Herald. You can also like us on Facebook, follow us on Twitter or Instagram to keep up with our latest antics.
Tag caribbean travel travel news