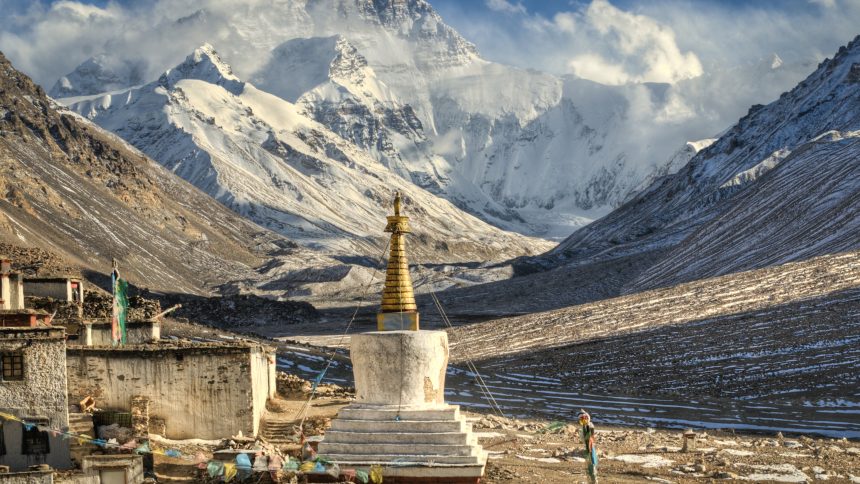 Earth’s highest mountain, Mount Everest is an ultimate location for climbers due to the fact that it rises towards the air for 8,848 meters (29,029 ft). Climbing this mount brings prestige as a reward owing to the fact that not many people can dare to climb up to its summit. Nevertheless, two Indian siblings, a five-year-old boy and his eight-year-old sister managed to reach the base camp situated at an altitude of 5,380 meters in the northeast Nepal on Monday.

The best time to climb Mount Everest is May due to the suitability of weather conditions for climbing. Considering the fact that these kids managed to reach the Kalapathar peak which is higher than the highest peaks of three continents – Mont Blanc (4,810 m) in Europe, Vinson Massif (4810 m) in Antarctica, and Puncak Jaya (4,884 m) in Australasia-  in August, they deserve all the credit.

The Indian siblings Kandarp and Ritvika were accompanied by their parents throughout the journey. Kandarp is 5 years and 10 months old, while his sister Ritvika is 8 years and 11 months old. The family flew to Tenzing-Hillary Airport of Lukla, which was rated as the most dangerous airport in the world by the popular television program Most Extreme Airports which is aired on The History Channel. 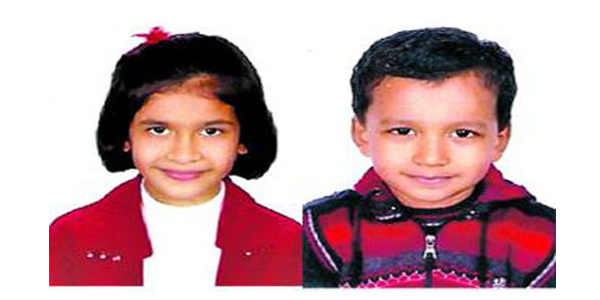 The Adventuring family might have been the first to reach the Kalapathar peak, since there is no record proving the success of another family in the past. The family embarked on this journey on the 2nd of August in order to transmit a message to the world that Everest trekking route was not damaged by the earthquakes.

What are the difficulties of climbing Mount Everest?

Mountaineers climb Mount Everest, which is among the most extreme places in Southeast Asia, in order manage a huge accomplishment, gain prestige, fund their activities through sponsorship deals and gain publicity to transmit a message. Climbing the highest peak on Earth is essential for people due to the fact that they deserve appreciation after completing this herculean task which is not dared by many people. The publicity gained by Kandarp and Ritvika is an outcome of their attempt to throw the ring to the Mount Doom.

Human beings are blessed with the ability to adapt to different altitudes. Nonetheless, this ability has its own limits, since we are not Iron Men. Considering the fact that reaching the summit of Everest requires climbing more than 8,000 meters, gradually decreasing amount of oxygen in the air causes climbers to breath with difficulty. Parents of Kandarp and Ritvika were wise enough not to take them over the death zone of 8,000 meters. 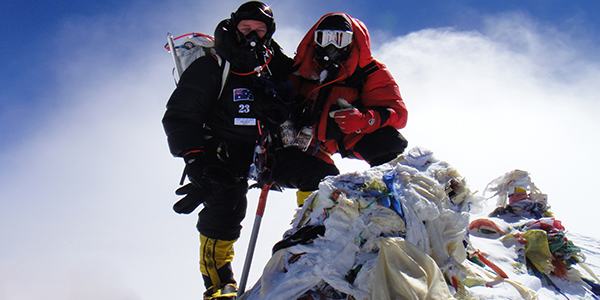 Special gear is needed to regularize breathing on the summit of Everest (Photo credit: Moustasche Magazine)

Another significant obstacle is air temperature. The standard atmosphere calculation estimates a drop of 0.65 degree-Celsius per 100 meters. Thus, climbing 8,800 meters mean being exposed to a temperature that is approximately 57 C less than the sea level temperature.

There are no paved walkways on the route. You should keep in mind that you are climbing a mountain. Since the path can be quite challenging, there is a chance of falling down hundreds of meters, which can easily kill you. Even if you don’t fall, there is a chance of getting covered under snow due to avalanche. 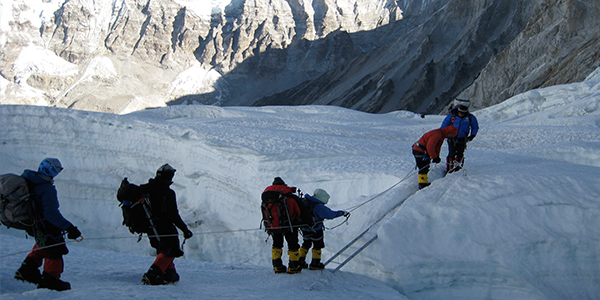 Climbers crossing a crevasse on Everest (Photo credit: Triump of the Spirit)

If you get through all of the obstacles above, then you should also watch your steps since there can be crevasses in the glaciers to swallow you. Everest does not surrender easily, nor does it wear a friendly mask. Mountaineering on Everest is an extreme activity on an extreme mountain; therefore the Indian kids can be regarded amongst the youngest extreme sportspeople in history.

Liked this article? Looking for the latest in travel and adventure news? Then check out the rest of our articles at Adventure Herald. You can also like us on Facebook, follow us on Twitter or Instagram to keep up with our latest antics.
Tag children climbers difficulties of climbing Everest Everest trekking route extreme mountain sports extreme temrepatures Kalapathar Kandarp Sharma Lukla Airport Mont Blanc Mount Everest Puncak Jaya Ritvika Tenzing-Hillary Airport Vinson Massif youngest climbers