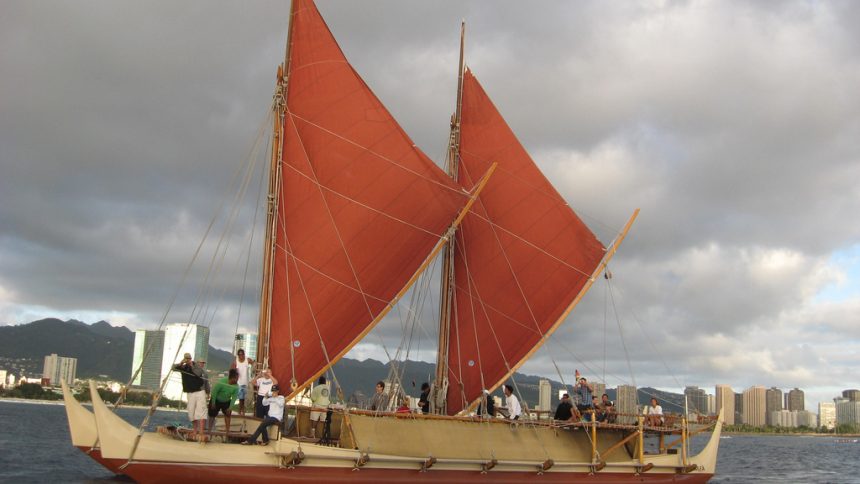 In the seventies, an ancient Polynesian-style sea craft was built and launched to revive native Hawaiian culture, which made its first voyage to Tahiti in 1976. The voyage has recently reached Cape Town, as part of its three-year long world tour, sailing the way how the first Polynesians reached the Hawaiian islands.

The Hawaiian canoe voyage is called Malama Honua, meaning “to care for our Earth”. The crew has sailed 16000 miles by replacing modern electronic navigation equipment with wave motion and celestial navigation. They have faced gale-force winds, lightning storms, horizontal rain and freezing weather around the African coast. The double-hulled canoe started its journey last year from Hawaii, and by 2017, it will complete its journey after anchoring at 100 parts in 27 nations, traversing over 60,000 nautical miles.

In their two week long pause at South Africa, the crew is teaching the inhabitants about traditional navigation techniques, Native Hawaiian culture and ways to care for the ocean. After leaving South Africa, the canoe Hōkūle’a will start passing through the 2400 mile straight line between Mauritius to Madagascar to the eastern side of South Africa, and their next destination is going to be Brazil. The crew will have to wait for the waves to die down, in case the journey becomes excessively dangerous.

Navigator Nainoa Thompson said in the craft’s website, “When we enter the Mozambique channel, it’s got the fastest oceanic, it’s called a western boundary current, in the world. It’s stronger than the Gulf Stream. So when the current comes down, it goes against the wind. What it does is it makes the waves bigger and it stacks them, it brings them close together.” He added, “Hōkūle’a does not like those stacking waves, she’s not built for that.”

Thompson said, “We’re finding the definitions of caring, compassion and aloha from many of the places that we go. We’re just very blessed and very fortunate to be witnesses to it among all the stories of rage and anger. I’ll never be able to say enough to the men and women on this crew that I’ve been so privileged to sail with that.”