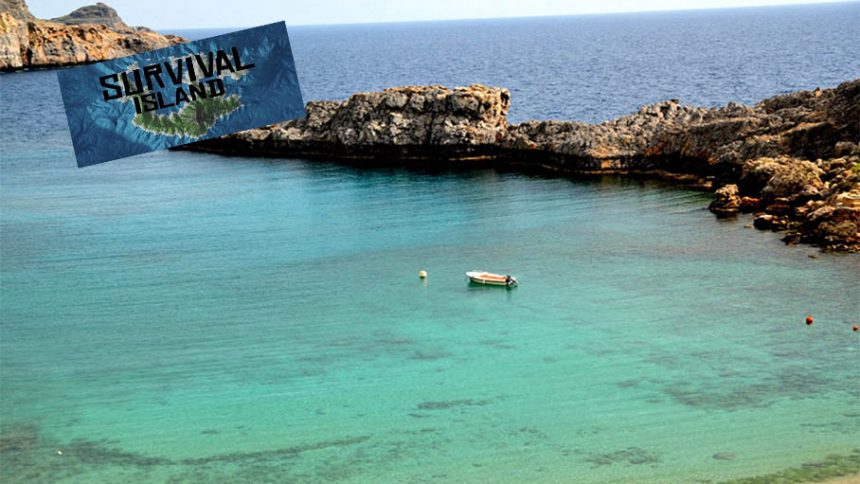 Have you ever heard the term ‘survival holiday’? A small Greek island offers you a real castaway experience with every aspect of surviving. Alimia is for you, if you are planning to experience something really unusual during your holiday or simply got fed up with the boring sightseeing tours and lying on the beach type of pastime.

What could be a better tourist destination than Greece with the matchless blue water and the small white bungalows? Thanks to the Belgian travel agency, the Beyond Borders’ creative idea, there is one more destination to enjoy unprecedented survival holiday in a deserted island. The travel agency spotted the small uninhabited island of Alimia, which is located between Rhodes and Haiki and planned to launch a Survival Game there in September, 2016 entitled “The Island”. This new type of tourism is expected to bring a new insight to the summer tourism in Greece. Here is how the personalized Survivor show works:

The Beyond Borders agency will pick 20 people who can take part in the game. During their holiday –  which will take 10 days –  they have to survive on their own by building shelters and huts, finding food and win points. The agency owner, Joris Meermans indicated the grandiosity of the prize which will be awarded at the end of the survival holiday, but he did not reveal the subject practically.

Benefits of Survival Holiday to Tourism

As Marietta Papavasileiou – the Local Governor of Tourism Deputy – highlighted, such original projects like ‘The Island’ emphasize the potential of the islands, attract specific categories of tourists and can even contribute to the lengthening of the tourist season. The mayor of Halki, Michalis Patros, added that this game is a pleasant alternative to highlight the beauty of Alimia worldwide. “We welcome the organization of such an event that shows a different way of promoting Alimia. I hope that this game will be successful.” he said.

Create Your Own Survival Drama

If you remember the film Cast Away starring with Tom Hanks, your first thought might be that being prepared for a survival holiday is unrealistic, but always useful since you never know what future brings.  For instance, Tom Hanks takes up the role of Defoe’s Robinson Crusoe and finds himself in a situation which he cannot control. Therefore, he has to live alone on a deserted island for a long time.  But, you won’t be as desperate as he is since there will be 19 more adventure traveler around you. So here is your turn to get your own castaway experience and create your own survival drama with hunting, shelter building and struggling with fire building and of course with getting cosy with a fellow adventure traveler if you like.

Despite the possible world-famous future of this small island, the Archaeologists’ Association on Rhodes has expressed their arising concerns about the idea of using Alimia as a survival holiday destination. The background reason is that a Neolithic settlement has been found on the island which may function as a great trace in discovering the island’s history.

Liked this article? Looking for the latest in travel and adventure news? Then check out the rest of our articles at Adventure Herald. You can also like us on Facebook, follow us on Twitter or Instagram to keep up with our latest antics.
Tag adventure travel Alimnia castaway experience summer tourism in greece survival holiday surviving on your own unusual travel experience