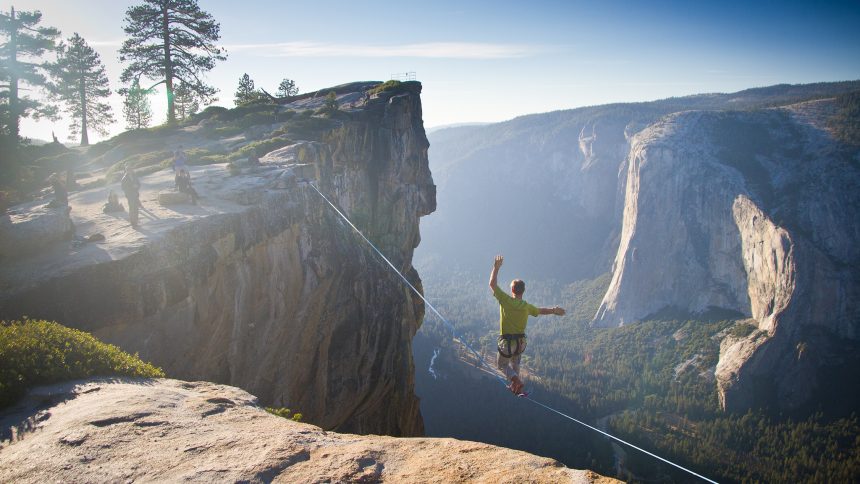 A daring Canadian has allegedly set a new record in slacklining for the longest free solo highline walk. Spencer Seabrooke, originally from British Columbia crossed a 64 m long slackline, strained between the two cliffs of the Chief North Gully in Squamish. Beneath him 290 m of vast emptiness.

The 26 year old Spencer used neither a harness, nor a net for his incredible stunt, which was filmed by his friend, the videographer Zachary Moxley, with the help of a drone. The video was published on YouTube on 10th August, but Seabrooke pulled off the show already a week before on 2nd August. The previous record from 2011 was held by a Californian with a 57 m long slackline in a height of 91, so Seabrooke topped it by 7 m.

Watching the video is not for the fainthearted. Seabrooke falls twice and catches the slackline only in the last minute. Boldly he pulls himself up again and continues his crazy walk. Every now and then Seabrooke encourages himself with martial shouts, before he finally jumps relieved on the rock on the other side.

“Without a doubt, it’s the fear of falling that keeps you alive,” Seabrooke said in an interview.

The dangers of slacklining are usually reasonable. An inch-wide nylon webbing is strained in a height of about one meter, often between two trees in a park. The sport is similar to the tight rope walking that can be seen in the circus, but the rope has more slack and can sway, which requires excellent skills in keeping the balance.

Seabrooke and several others, who want more adrenalin to pump through their veins, have taken the sport to another level. What they do is called highlining, which is normally performed with a harness for security.

We congratulate Spencer Seabrooke and wish him all the best for his future highlining adventures!

Liked this article? Looking for the latest in travel and adventure news? Then check out the rest of our articles at Adventure Herald. You can also like us on Facebook, follow us on Twitter or Instagram to keep up with our latest antics.
Tag adventure canada extreme sports news records slacklining sports